This is the beginning but is it really the beginning of the end for the New 52. The villains have taken over and it will not be good for the heroes. Not at all.

If you're a major comic book publisher and you have a big crossover event, you have to go all out these days. You have to start big and go over the top. That's what FOREVER EVIL sets out to do. This is a good and a bad thing. After the events of Trinity War, we saw the Crime Syndicate appear in the New 52. This issue apparently picks up an undisclosed amount of time afterwards. There is something fun about jumping forward and seeing how things 'catch up' but it does also keep you guessing.

Geoff Johns starts off FOREVER EVIL with none other than Lex Luthor. Having enjoyed his take on Lex in the past, it's a nice way to start off an event focusing on the villains. But is Lex ready for this event?

It can be seen that Johns and DC is not afraid to take some risks. They are indeed shaking up the New 52 Universe. There will be casualties. Too often in the past, we've seen promises for big changes or repercussions only to have the stories fizzle out a bit. This isn't a slow build up. This isn't just the first issue where you have to wait for things to get set up in order for a big bang. Things do explode here.

David Finch does his thing here wonderfully. He's all over the place, in a good way. Seeing his detail is always nice. There's some good transitions between panels and the different perspectives within each scene. And who better to draw practically every single villain in the DC universe in one single scene?

There's almost too much too soon. Yes, we are in the third year of the New 52. There was always the impression that we were getting a bit of a slow build in establishing this comics universe. We had the dreaded five year time period and have been getting to know or being re-introduced to characters. Now, the face of the DCU is being changed and devastated in some ways. We're seeing some big changes, especially with one character in particular. This one character is being affected in a big way. Their status quo is going to change big time. In comics, things can always get reverted some how. This just seems too much for a long established character.

There's also the question of when does this take place? The jump from last month's JUSTICE LEAGUE is one thing. But now we're told the Justice League is dead? When did this happen? When will we find out 'how' and when? Will the events of this series directly tie into the regular titles? In November we have Zero Year month for some titles. Does that mean we'll have titles in the 'future,' present and past?

Minor thing but would Amanda Waller really be in a prison cell in order to talk to Black Manta? Yes she can take care of herself but it seemed a little odd. Maybe it's just me. And did Nightwing really swing all the way from Chicago to Gotham, carrying Zsasz in order to deliver him to Arkham?

If you're looking for a big comic book event that is actually going to have things happen, this is one you'll want to check out. Geoff Johns has set out to shake things up and he does full force. If you thought the DCU was safe since we're only three years into the New 52, think again. With one character in particular, we see Johns is not afraid to tear down their status quo. There will be repercussions. We'll have to wait and see how it plays out from here. The story is set in the near future so there may be some slight confusion, especially in how this will relate to the regular series, all of which are taking a sort of break this month with the Villains Month issues. David Finch masterfully captures all the characters required to appear here. There is plenty of action and destruction. Geoff Johns and David Finch mean serious business here. You won't want to miss this. 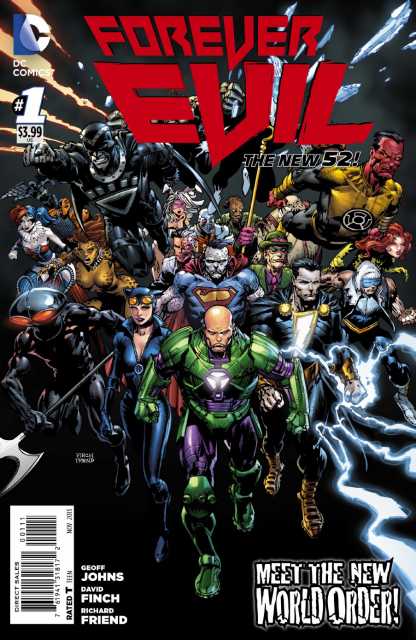