Flash Gordon #1 - The Man From Earth

Fasten your seat belts and great for some fast-paced Flash Gordon adventure.

Flash Gordon is such a classic character and it always amazes how he stands the test of time. Dynamite Entertainment has delivered Flash Gordon stories recently but this time around it’s written by Jeff Parker. From the very first page, Parker’s interpretation feels spot on. We jump back a year before Flash, Dale or Dr. Zarkov leave Earth and it’s just the right amount of flashback to fill in new readers on who these characters are. The story then jumps forward to the present with the action already underway. Flash and friends are in Zarkov’s ship with Ming the Merciless’ men on their tail.

As the pursuit goes underway, we get to discover different areas of Mongo and beyond. We get a sense of how some of the technology might be a little different than we’ve seen in the past. Parker does a great job in capturing the essence of who these characters are along with giving them a nice modern feel at the same time. It's familiar and new at the same time, full of excitement.

Since we’ve seen so many Flash Gordon stories in the past, good and bad, the art could play a big part in separating this from the rest. Evan Shaner gives each character a great look and combined with Jordie Bellaire’s colors, the book has such an incredible feel. Bellaire colors so many titles these days and the combination of the art and color will appeal to even non-Flash Gordon fans.

It feels like we’ve had a lot of Flash Gordon relaunches lately. Parker’s KINGS WATCH showed us Flash Gordon before their adventures began. Dynamite also had some different series before. While it may have been about three years ago (FLASH GORDON: ZEITGEIST), it still feels recent to me. Hopefully this series will last so we don’t have to see another relaunch.

The time jump does add a bit of mystery to the story. We don’t necessarily have to see the trio first take off but it’s unclear how long they’ve been on the run from Ming’s men or what other trouble they’ve gotten into. It could be explained in upcoming issues but it feels like they’ve been at this at least for a little while but it also seems like they haven’t actually run into Ming just yet.

Flash Gordon is here once again and the adventures are just beginning. With Jeff Parker at the helm, we get a great sense of who the characters are with a nice mix of the classic feel combined with a modern take. Your socks will probably get knocked off when you see Evan Shaner’s art and Jordie Bellaire’s colors. It’s a safe assumption that a Flash Gordon story written by Parker will be fascinating but the art and color will make sure you’re glued to the book. 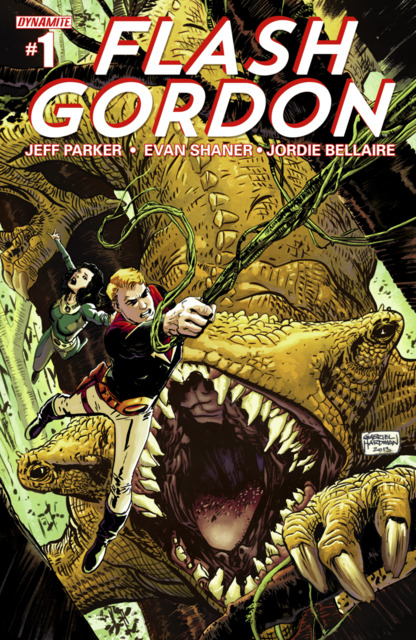