Jimmie Robinson's second story in FIVE WEAPONS is nearing its conclusion and the writer/artist/letterer uses this ninth chapter to answer some very big questions. Who poisoned The Nurse? What is Tyler's plan? What's the deal with the "new war"? All is revealed in this issue and it paves the way for what will apparently be a massive follow-up.

Much of this issue is Enrique putting together the pieces and then explaining how he found everything out. Needless to say, that means this issue is very dialogue heavy. However, if you're like me and you've been legitimately immersed in this little world, odds are you'll have your attention locked on each panel. Sure, this means things aren't all that exciting -- don't worry, there's some great action in the end -- but it's honestly interesting to see how Enrique was able to solve this latest puzzle. What's equally fun is then going back to see the hints Robinson laid out for us. The book then promises to take a ginormous change in direction. It's a lot to take in, especially since there's been minimal coverage of the path the book is about to take, but I have faith it'll be fleshed out well enough in the next issue. Plus, it's just enough to keep this book refreshing. The formula he's been using most certainly works, but it's commendable Robinson's taking such a big risk with the narrative.

There's a moment in here that's worthy of a cliffhanger and I fully expected the chapter to conclude on that note. But it didn't and what followed was a swift yet thoroughly awesome battle. Everything from the buildup to how the panels were presented made the sequence ridiculously fun to witness. To top it off, it then leaves me incredibly stoked to see how the next issue will go down.

Robinson's pencils and Paul Little's colors once again produce a seriously good looking issue. The pages are consistently pleasing and I really enjoy how much creativity goes into these panels. Whether it's something as simple as how they show a character passing out to the way the final fight flows so well, there's just so much for your eyes to appreciate. The style's a phenomenal fit for the book's atmosphere.

While this issue drops a lot of "aha!" moments, I couldn't help but feel like many of the storylines I was invested in reached a somewhat swift conclusion. It's mostly satisfying and it all makes sense, but it feels a little crammed in there so the book can focus on its next big step in the conclusion.

Minor error: in the woods, a dialogue box meant for Tyler is coming from Enrique.

FIVE WEAPONS continues to deliver exactly what I've come to expect from it: wonderfully animated visuals, a clever script, and an ending that'll have me speculating until I get my hands on the next issue! This chapter spends much of its time connecting the dots for us and then hits us with a huge reveal. Now I'm left extremely curious to see what'll happen next! 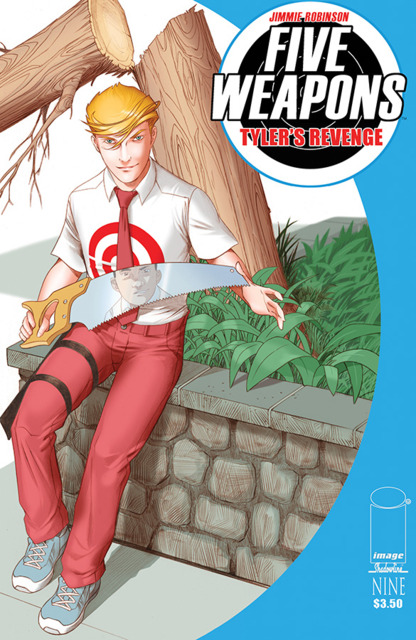