A new group of enemies wants to take over the school of Five Weapons. Can Enrique and the gang stop them or are some major changes coming to the school?

There's a new "weapon" in town and Jimmie Robinson (series creator, writer, illustrator, letterer) makes sure their debut is a lighthearted blast. We're talking about a fight between kids that involves guns, arrows, snakes, blades and more, yet Robinson never manages to darken the book's tone. Even when there's the threat of death, the exciting visuals and standout characters remind you this world is all about taking a twisted concept and then making it embrace a lighter tone so it can appeal to readers of any age. This has worked well for him in previous issues and, thankfully for us, it still works in this final chapter.

Introducing new characters and their unique abilities means there's a pretty heavy amount of exposition. But, for the most part, Robinson makes it work and even weaves it into someone's agenda. This new cast of individuals continues Robinson's tradition of making sure his book is full with diverse characters and lovable personalities -- a very respectable quality. Yes, making a truly unique character nowadays would be a real obstacle, but the variety of characters and traits he presents is refreshing and leaves me wanting to learn more about these fictional beings. And the best part of it all? A majority of this book is finding a way to make these personalities bounce off each other and have them show off what makes them special in combat! The formula becomes a tad repetitive, but that's countered by the fact it's totally entertaining and left me anxious to see what pair he'd present next and how they'd interact. And, while this is all going down, we're of course left wondering how Enrique is going to possibly save the day. Even with the very last chapter, I'm still having a good time keeping an eye out for clues.

I've really enjoyed the more cartoon-esque and clever visuals in this book and, thanks to a new set of abilities and weapons, it really seems like Robinson (as well as colorist Paul Little) went all out with this one. There's a lot of nice little effects that are thrown in the mix to enhance the experience (like the arrows when a certain character moves) and the assortment of new effects kept these battles visually stimulating. To go into details would spoil the fun, so I'll simply say they did a solid job presenting each fight and made sure they were an enjoyable ride.

On the final page, Robinson notes he wanted to end the series with issue #15, but he instead had to make it all conclude with this chapter. Unfortunately, the need to wrap up the franchise early is a noticeable one. The ending feels pretty abrupt and it's a real shame we won't get to see more of these new characters. The potential for new character dynamics is stronger than ever before, so it's disappointing we won't get to the opportunity see more of this new cast interacting with the preexisting ones. On top of that, there's no additional closure with Tyler. The ending just begs for a third volume, too!

It's a major bummer this series had to conclude sooner than anticipated and it's absolutely something that would have been noticed without a note from the writer at the very end. It feels like Robinson was doing so much worldbuilding with these latest issues, and even though it stinks we won't get to see his full plans for this universe, it still feels like we received a decent glimpse of what he had in store for it. Despite needing to wrap things up early, Robinson still manages to craft another satisfying chapter from the lovable series. Enrique's intellect is once again put on display, there's an absurdly fun set of action scenes, and, as expected, Robinson and Little make sure the visuals are every bit as fun as the lively assortment of characters are. Even though the ending is totally abrupt, I still had a blast reading this. If you're looking for a smart, delightful and exciting all ages story, I strongly recommend checking out FIVE WEAPONS from the very beginning. 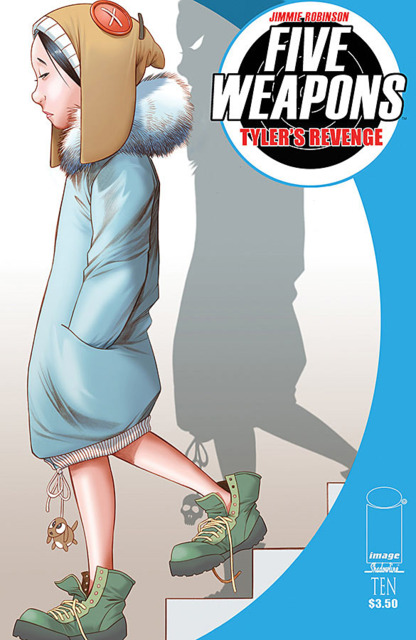