Will the FF survive their trip to the Negative Zone? And the Wizard proves once again that he is all sorts of creepy.

If you didn't love the FF before (especially Bentley!), you will leave this issue absolutely adoring this cast of characters. At the core of this series is the humor, something that the series' writer Matt Fraction executes incredibly well. Fraction really captures the life of these characters in his writing, making this series unlike any other Marvel series due to the dynamic and the interactions between the characters on this team and the kids. Reading this issue you get the sense that Fraction truly knows these characters and has a real sense of who they are and what they are all about -- he has no trouble finding their respective voices. It's fun to read a comic where it really feels as though the series' writer is enjoying writing the series as much as fans like myself are enjoying reading it.

The issue opens up with a hilarious scene featuring Bentley and his "new family:" The Wizard, Medusa and Blastaar. The Wizard -- who is manipulating Medusa -- has her convinced that the Negative Zone is her home, that he is her husband and that Bentley is their son. The dialogue in this opening scene is absolutely hilarious and paired with Mike and Laura Allred's art, this issue is simply a pleasure to read. The close-ups on the faces of these characters is fantastic: Allred captures their emotions perfectly.

What is great is that as campy, goofy and fun-filled as this story was, there is also some traces of character development as well; particularly in the case of Scott Lang. It's been bittersweet seeing him mourn the loss of his daughter, an event that really tugged at his core. Yet it's also sweet to see how being the one responsible for looking after these FF kids has given him a sense of purpose which is something that peeks through in his conversation with Onome. And Scott's issues with his daughter aren't the only moments that give the sense of character development, either. There have been hints at a romance brewing in this series and there is a moment that only serves to further reinforce that idea.

My only complaint (and I know some people will disagree with me) was some of the layouts for the action scenes. While Allred did an incredible job giving readers a sense of what these characters are feeling and thinking through his execution of expression and body language, when it came time for The Wizard to go head to head against the FF there were certain panels that felt a bit too cluttered. Some of it was great, like seeing Medusa's hair weaving in and out of panels and the panel where Ant-Man actually changes in size: these were two examples of the great detail in the action scenes. Having said that there were still some moments where I personally felt it was hard to distinguish what was going on. Still, this is really a minor detail and in general didn't really remove me from the reading experience.

Fraction manages to brilliantly execute a dynamic between an unlikely group of characters that will keep you entertained from the first to the very last page of this comic. These characters are interesting, their personalities unique and their interactions entertaining. I think one of the things I am enjoying most about this series -- and it is really highlighted in this issue -- is the fact that it feels a lot like a Silver Age comic. The colors, the dialogue, the structure of the story all give this sense of being a sort of throwback to the past. This is particularly evident on the final page featuring one of my favorite villains. The dialogue and layout of this scene calls back to classic comics and it's really very cool.

Overall, I really love this series and felt this issue was great. Not only is it well written with some fantastic and very humorous dialogue, but it does a good job exploring some of these characters individually. Fraction makes sure to drop some hints about some possible underlying character developments that may prove to be very interesting in the coming issues. The issue itself is relatively self-contained and very accessible to new readers, introducing the characters in a way that is easy to understand even if you haven't been following the comic from the start. Mike and Laura Allred do a fantastic job capturing emotion, expression and humor in the interior art and they are one reason why I personally keep coming back for more. This is another great issue of FF and I definitely look forward to seeing what this creative team has in store for us in issue #8. 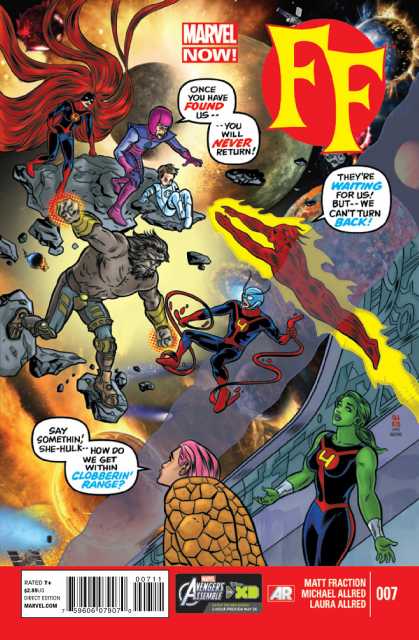