Valkyrie refuses to simply let one of her new team die, even if it was a worthy death. How far will she go to bring back her teammate?

Cullen Bunn continues his tale of the B and C-list heroes that will not be forgotten, and with good reason! I originally didn’t care for this story as much as I hoped I would, but over the last six issues, it’s quickly become the book I always hoped it would: one that treats its starring, if unappreciated, cast with appropriate reverence, but also acknowledges that there’s PROBABLY a reason none of them are taking on Thanos. This issue picks up after newly introduced Dr. Annabelle Riggs sacrificed her life to stop the Dark Valkyrie Brunhilde’s rampage, and Valkyrie, returned to her former self, is wracked with guilt over her new friend giving her life. But this book quickly reminds readers that not only is this comics, but this character gave her life in service of the Norse Pantheon, so she’s less “dead” and more “hanging out in Valhalla,” leading to one of my favorite scenes ever in comics: someone just absolutely miserable with her paradise afterlife. The good doctor is VERY clearly an introvert in a heaven where everyone is either a drunk viking or an overly-amorous serving wench. She can’t even catch a good night’s sleep with the Forever Party occurring around her, so it falls to Val to enlist a character who hasn’t been seen in quite some time in comics to Dr. Riggs back from the dead.

Stephanie Hans handles the art and she’s perfectly suited to this book, with a classical painted style that evokes great, ancient works of art. It’s like Frazer Irving’s painterly style crossed with Stefano Caseli’s ultra-detailed facial features and expressions. The action moves beautifully and fluidly, but there’s actually very little of it, which is why it’s good that Hans draws such expressive faces during the dialog portions of this issue. Special attention should be drawn to her vision of the afterlife: Valhalla looks appropriately festive, but a dark pall hangs over the entire setting, which is perfectly evocative of Riggs’ weariness and discontent with her situation.

The only bad parts are very minor and definitely don't detract majorly from the book, but they come with necessary spoilers, so be warned! Dr. Strange’s estranged wife Clea is the method through which Dr. Riggs is resurrected and both the revelation that she’s still around and kicking in Valhalla and the method that she uses to bring Stephanie back are a little too convenient and quick. I feel that this could’ve been stretched out well over the course of at least two issues, so the entire thing comes off as a bit rushed.

Without going into TOO much detail, I will say that I love that this issue brings back a trope from old Thor comics and applies it to Valkyrie in a way that is far more interesting than even the original was. This is definitely an issue that focuses on Val and Dr. Riggs (though Misty Knight DOES appear at the end), but with how last issue ended, there really weren’t many other options, so I’m absolutely willing to accept that and go along for the ride. I’m also happy that the one new character introduced in this series isn’t just relegated to Redshirt status by the end of the first arc, but seems like she’s going to stick around. This is a great point to start getting into Fearless Defenders (but by all means, check out the last arc as well). 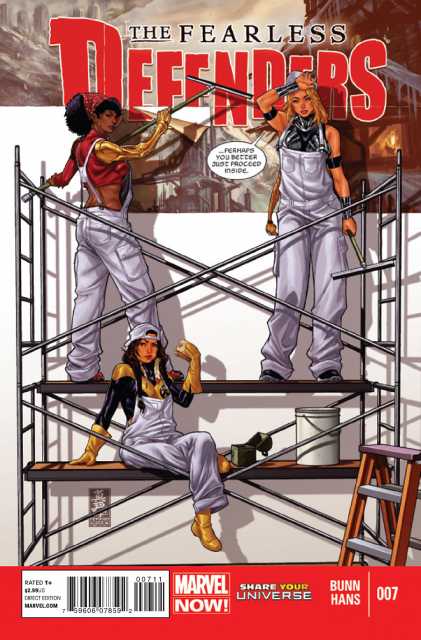