Valkyrie, Hippolyta and Dani Moonstar fight The Doom Maidens in the latest issue of this series.

This issue centers around the trio of warriors: Dani Moonstar, Hippolyta and Valkyrie and these three ladies certainly have their work cut out for them. The latest issue features a plenty of action, so if fighting is what you are looking for then this is going to be right up your alley. The Doom Maidens are led by Caroline LeFay and Mr. Raven, the villains we saw in previous issues of this series. I like the portrayal of these three characters in this issue, it seems as if they work very well together in this series and this issue is great example of that.

The redeeming quality of this issue, aside from the action if you happen to be into that sort of thing, was the dialogue. The series' writer knows how to be funny, and he eloquently references continuity while cracking many of his jokes. This was something entertaining that I certainly enjoyed seeing play out in this issue.

Oh, and the cover is pretty cool too.

The moment where the fearless trio gets back-up from, quite literally, every single female Marvel character is kind of cool, but also a little bit silly. While it's cool to see all these characters together in the pages of the same book, it still reads a little bit like a plot device. It's almost like saying, "well, we have a series of strictly female characters, let's take the opportunity to rope in each and every single female character in Marvel comics.

I think this also could very easily have been a more personal issue for Valkyrie's character since she is directly related to The Doom Maidens, it was turned into something of a free-for all.

Although it is somewhat neat to see all these female characters come together on the pages of this series, it is somewhat silly in the end. It's great seeing familiar faces that we haven't seen in a long time like Elektra, for example, but what is she really doing here in this issue? What is the purpose of having so many Marvel ladies all in one place? It feels more like fan-service and less like the natural progression of the story.

The art is, once again, good but certainly not the best. The pencils are solid but the heavy inks and colors make the comic feel a bit too "cartoony." As a result, it's a bit hard to take it seriously.

Although the appearance of so many characters in one book reads awkwardly, some of the dialogue was clever and funny and that at least redeemed the contents of this issue a little bit, at least for me. 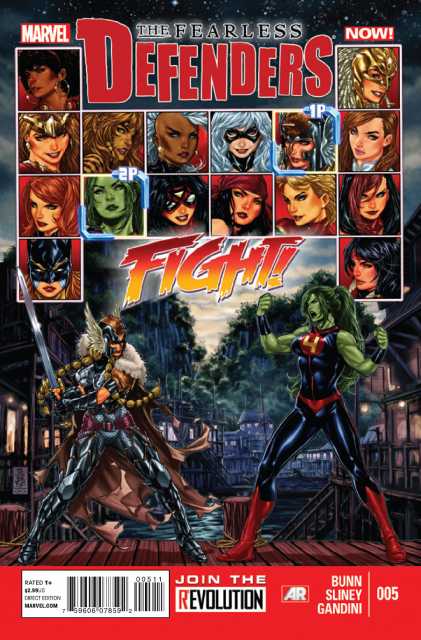