Valkyrie takes center stage as the leader in the latest issue of FEARLESS DEFENDERS.

This issue is all about Valkyrie. Well, not all about Valkyrie but it's mostly about Valkyrie. One of the big highlights in this comic is the way we not only see her take responsibility for her actions and her mistakes, but we also get to see the character take on a leadership role in a very big way. It is through her actions that this group is brought together and begins to feel like a real team. The issue picks up where the characters were left off with Valkyrie facing off against a group of Doom Maidens who believe Valkyrie to be their sister. Valkyrie needs all the help she can get and therefore gets a bit of help from Annabelle, Misty, Hippolyta and Dani Moonstar who was successfully saved from the clutches of Caroline Le Fey. The result is a team that feels cohesive and connected: these ladies are given a common goal and that has, in turn, motivated and brought them together. The great thing about this development is that it doesn't happen completely out of the blue, instead it feels like we have been building up to this moment and as a result the reward feels all that much greater.

There's a great balance between the plot and more serious tone of the story and the comic relief that Hippolyta, for example, provides. Although the language used to depict both Valkyrie and Hippolyta is similar, these are obviously two very different characters and they have very unique personalities. And while this issue is mainly about Valkyrie, her decisions, her role as a leader and how she will solve her current predicament; it is also a great example of the way Hippolyta's character provides humor and balance to the story. The jokes are quick and very snappy, and the result is a fun issue that keeps readers on the edge of their seat.

One of the highlights of the issue was the moment where Valkyrie delves into her own past, reminiscing about her own evolution as a character: where she went from being a Brunhilde of Wrlstead Arms, to being a Maiden of Rage. The layout of these panels during this scene are great: focusing on her face specifically really gives readers this sense that the character is thinking back to another place and time in her life where things were very different. The series' writer leaves readers on the edge of their seat, delving into this memory for only a moment before moving the story forward and back to the present. This tactic really makes you, as the reader, think and wonder about this scene and its meaning to Valkyrie's character. When did this moment occur? What exactly led to this battle? Hopefully these questions will be answered in the future.

While the art is good overall, there are some panels where the characters seem very flat. It is almost as if there is something off with their proportions. Overall though, the art is alright and this is only a problem in some of the panels. One of the things I don't particularly like, however, is how heavy the inks are in this book. The lines seem very thick and give the characters this appearance of being too blocky. There are moments where they look as if their heads are floating or detached from the rest of their bodies.

While the story definitely seems to be improving, where Hippolyta stands as a character and her role in this story overall seems a little bit on the fence and unclear. One minute she is attempting to take Dani back to Hela, and the next she is gearing up to fight alongside Valkyrie. This isn't necessarily a bad thing, but this sudden change isn't something that is really explained.

Overall this is a fun comic. I think what stands out the most from this issue is the interaction and the dynamic between these characters: while Valkyrie is most definitely at the center of the story, each one of these ladies gets their moment to shine in this issue, even if its just for a moment. They each have their own memorable panel in this comic and overall the result is great. The issue is fun and funny, but it also briefly explores Valkyrie's past in a way that is interesting: the writer makes sure to leave this moment somewhat open-ended, leaving readers wondering what will happen next.

This issue is very balanced: it has everything from mystery to humor and the pacing is really good. Of the issues before it, this is certainly one of the best in the way that it showcases these characters individually whilst continuing to develop a story that is both interesting and entertaining. And although I am not totally crazy about the art, I am still looking forward to the next issue. 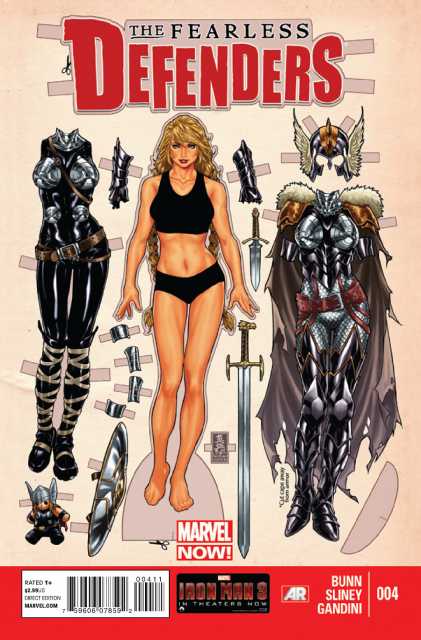