Brubaker delivers another stellar issue that looks further into Josephine's past, connecting her to World War II.

The latest issue of FATALE takes another look at Josephine's past, this time launching a story in Romania, 1943 in the midst of World War II. Brubaker takes a historical event and adds a whole level of eerie into the mix, demonstrating that these monsters were not only present in the United States, but in parts of Europe, too. Thanks to the war the monsters we've seen in the last thirteen issues of this series are able to "hide in plain sight," so to speak, making this a very interesting story.

The choice of setting (WWII) is interesting and makes for a rather striking story, but it makes even more sense why Brubaker would choose such a setting as we read further into the tale. Josephine is introduced at the start of the issue after a brief glimpse at the setting and at a character named Walt who comes into contact with a mysterious, cryptic document. We learn that she, once again, is searching for answers into her past, showing readers that this journey of self discovery has been a life-long process and one that has not been very easy.

The idea of "Hitler's mystic priests" is a very interesting one, and one that is bound to pique the interest of readers of this series. The context of this story and the way it unfolds is incredibly entertaining, and it does not disappoint. Following the introduction to Mirela, Brubaker ups the ante on the momentum of his story, increasing the pacing and the level of mystery and excitement. The result is perfect and by far one of my favorite issues of this series thus far.

Once again, Sean Phillips knocks the pencils and colors out of the park. His art in this issue is absolutely beautiful -- totally eerie and creepy when it needs to be, and somber in scenes that are necessary. The result is a very well drawn story that really engages the reader, delving further into the story of a woman shrouded in mystery.

There were moments when Brubaker would delve into Josephine's story that felt somewhat rushed. Her relationship with the old woman in the story, for example, is passed over very quickly. Readers are introduced quickly to this new character and not much time is spent on the relationship between them. While this might not be at the very center of the story, I still think it would have been nice to see Brubaker delve a bit further into the relationship between these two characters and the way it eventually developed. What led them to be closest of friends, for example? That isn't really something that is depicted in the story, and it would have been nice if it were.

Of all the flashback stories focusing on Josephine's past this one tops my list as one of my favorites. Setting the story during World War II not only serves to illustrate how long Josephine has been cursed, but it also gives a new dynamic to an already intriguing tale. It kind of makes you wonder, where hasn't she gone? How long has she been wandering the earth with this curse, just barley avoiding death at the hands of these monsters?

The art is absolutely breathtaking. The structure of the panels are perfect and the colors compliment the fluctuation of the story. Setting his story during World War II adds a whole new level of intrigue and mystery to his tale, and it is one of the things I enjoyed most about this issue.

Like the previous three issues, this one is a pretty good jumping on point for new readers because it feels relatively self contained. Although it draws on certain elements we've seen in the series throughout, it is still generally pretty easy to follow along. The end has certainly piqued my interest and I am definitely looking forward to the next issue. 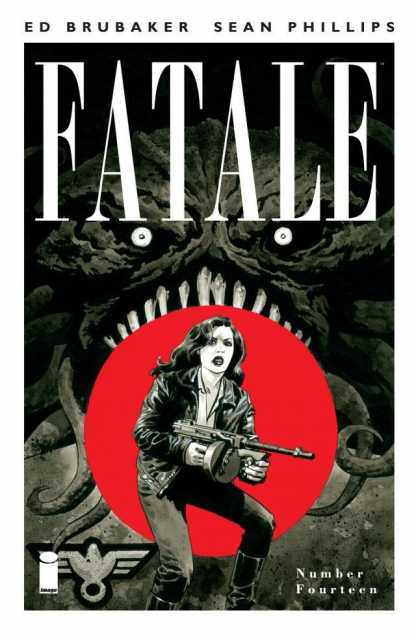