Is the reboot of Fantastic Four a step in the right direction?

Fantastic Four had a lot going against it. Fans of the comic book series have been stand-offish about the reboot from Fox, especially after two films from the studio which failed to hit their mark. However, with a new cast, new director, and new writers, can the reboot of the series take this iconic super-hero team in the right direction or does the film feel more like Fox trying to retain the rights to this legendary Marvel team? Fantastic Four is the underdog you want to root for that just falls short.

In the reboot, Reed Richards is a brilliant child scientist who befriends a classmate named Ben Grimm. Together, they work on a teleportation device, all the way up to high school, where Franklin Storm asks Reed to come to his school for scientific geniuses, to perfect the teleportation device, which turns out to be a piece of technology that moves matter from one dimension to another.

Reed meets Sue Storm, her brother Johnny, and recluse Victor Von Doom as they work to complete this machine. After some indeterminate amount of time, the machine is completed and in a drunken stupor, Reed, Victor, Johnny, and Ben head to this new dimension and get blasted with energy, and Doom is left there to die. When the machine returns, it emits a blast which hits Sue and the four of them develop the super-powers fans are familiar with. While being examined by the government, Reed escapes and goes into hiding.

Jump ahead one year, Johnny, Sue, and Ben are working with the government and need Reed to make the inter-dimensional machine work again. They find him, get the machine up and running, travel back and scientists find Doom there, where he comes back to Earth, kills a bunch of people, then heads back to his dimension where he uses his powers to try and dissolve the Earth as Doom makes its matter into energy for him. The Fantastic Four jump in and save the day, but only after realizing, 30 seconds into the fight, that they need to work together. The final act of this film comes out of nowhere and is an utter mess. It feels rushed, which is saying a lot.

Fantastic Four is essentially an hour and forty-five minute montage for a movie that doesn't exist. It feels like a trailer more than a complete story. There's little connectivity between scenes, where the audience feels dragged from one to the next. The audience is constantly being updated with information they've already seen through expositional dialogue, many times from a government official named Harvey Elder, played by Tim Blake Nelson. In the comics, he's known as Mole Man. His dialogue is 90% explaining what just happened or something the audience is going to see mere seconds later and 10% lines the writers think the audience might say about something that just happened like "That was a good speech." The movie reaffirms what's happening way too much and tries to use those dialogue pieces as transitions between scenes, which ends up being a jolt.

The film never takes the time to breathe or bathe in a moment. It just jumps from scene to scene at a grueling pace, yet the film seems to drag on and the runtime isn't even two hours. Thus, there's a disconnect from all the characters in the film because the audience really never gets to truly know who these people are. Reed is a genius and his parents and teacher (the worst science teacher in the history of film) don't understand him. Ben is his friend and seems like he might be a good one. Sue sees patterns in things. Those three characters come off extremely flat. Johnny Storm likes to race cars. He's charismatic and intelligent.

Michael B Jordan is one of the saving graces of the film because he's so much fun to watch, but he's still written a tad flat compared to any other character from any other super-hero film, or any decent film for that matter. Then, there's Victor Von Doom, played by Toby Kebbell, who is easily the most defined character in the entire film, and he holds, in total, probably 20 minutes of screen time too. He's a nomad. He wants power. He wants to be remembered. The major downfall of Doom is that he's introduced as a threat to this new team about 15 minutes before it ends, and the glowing green all over his body looked a tad absurd.

However, conceptually and overall story wise, this film could have been worthwhile. As a whole, this could have been a great, contemporary look at this team. Dimensional-travel, super-powers, working for the government, all of these pieces could make up a great film. This was something that truly stood out about it all. There are lots of small moments and glimmers of hope as well. As Johnny, Victor, Ben, and Reed travel to the other dimension, the film makes this turn into an adventure film, and it's pulled off so well and reminiscent of so many great adventure films from movies in the past. In addition, seeing these characters work for the government, on its own, could have been a great film too, especially if the audience gets to see them learn to use their powers, which they don't because it jumps forward a year where everyone has pretty much honed their craft. Even the last 15 minutes with Doom could have made a great film on its own. Fantastic Four simply tried to pack too much into a short amount of time, and while there's plenty other big problems with the film (dialogue, characterization, even the CG), this is the biggest problem. Calling this "too ambitious" does not seem like the right phrase though. This feels more like there's "too many cooks in the kitchen." Too many writers, producers, and the studio trying to pack this film with way too much.

Fantastic Four was a movie I desperately wanted to be good. I was really rooting for this film, but all-in-all, it misses the mark. It's not the worst comic book adaptation around, but it's not memorable. There are moments where the audience could see the potential for a great film or even three great films, but between the pacing issues, problematic dialogue, and the overall montage feel of the entire movie, it sadly falls flat. It's a film that feels like it's just Fox trying desperately to hold on to the rights to the Marvel team. 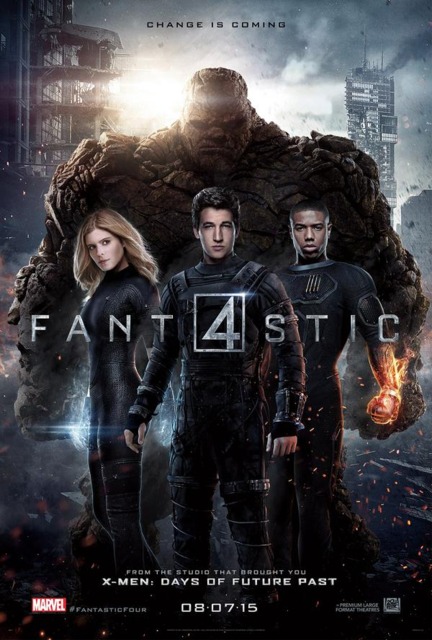