The last issue left readers wondering "what was it that Johnny did to Ben that was so terrible?" Well, here, readers get their answer, and it's not as bad as one would think, but it is something that would affect Ben's life and trust in Reed.

Once again, during scenes that took place in the past, Dean Haspiel and Nolan Woodard took over on art duties giving the scenes a nice Silver Age feel. It brings an element of fun into and overall extremely depressing issue. On top of that, we have Leonard Kirk with Karl Kesel and Rick Magyar on inks and Jesus Aburtov on colors doing a phenomenal job through the rest of the issue. Yeah, there's a lot of cooks on this dish, but they're all doing a fie job.

The majority of this issue, without spoiling it all, deals with Ben losing the friendships around him. Now that he knows what happened, he feels betrayed by Reed and Johnny. He's spent years being the butt of the joke from Johnny, and it all comes to a head here. No, he doesn't clobber Johnny, but he does come to a point where he can't take it anymore. Again, this is a sad issue, but James Robinson writes it so well.

This book ends in a fantastic way. No pun intended, but I'm totally keeping it in. Robinson has been setting up what's coming down the pipelines for a few issues now and the ending is supposed to be shocking, but as a fan of earlier FANTASTIC FOUR stories, I like how this ended. Sorry, no spoilers, but this is going to make for some great future issues. Ben has a lot on his plate now and I can't wait to see what Robinson has coming up for him and the rest of the team in the next issue.

The issue gets so focused on Ben and Johnny and moving forward with the next story that the reader gets nothing with what's going on in the three other stories happening in FF. We know Sue is hurt and that's about it. However, at the same time, adding anything to this issue would take away from the main story.

This cover has nothing to do with the issue. None of the characters on this cover are even in the issue. Sue is mentioned, but that's about it.

I haven't been a big fan of more contemporary Fantastic Four volumes and creative teams. They just weren't my cup of tea. However, I am loving what James Robinson is doing with this team and series, even though this issue was incredibly depressing. I love the flashback scenes with Haspiel and Woodard on the art, and this series has really captured my attention in a way other volumes and creative teams have failed to do. Overall, I highly recommend this issue. 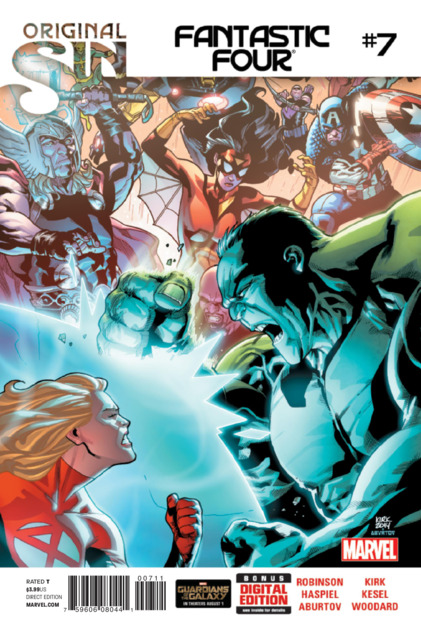