Ben Grimm finds out something interesting about his history with Johnny.

This issue is an Original Sin tie-in and thankfully, it doesn't interrupt the main story in FANTASTIC FOUR. Writer James Robinson gracefully works it into the currently story line, while the Fantastic Four deals with the fact they can't get into the Baxter Building and their kids were taken away after the court case of the century in the last issue. Readers still see what happens to the team when they get back and what is going on with Hammond and the kids of the Future Foundation.

As with every issue, Leonard Kirk, along with Karl Kesel on inks, and Jesus Aburtov and Veronica Gandi on colors, do a fantastic job on the issue, especially on the two-page spread with Sue going off on the Avengers, where we see two different perspectives of the event. There's a lot of larger panel work in this issue where Kirk really shines and readers get to see a ton of different characters in his style, and it all looks great.

The second half of this book is pretty awesome, as Dean Haspiel and Nolan Woodard take over on art for a moment when Johnny wronged Ben in a secret moment, unleashed by the eye of Uatu. The scene has this classic, bronze age art feel to it, and it's very cool to actually see the moment that was unleashed inside Ben's mind, especially when it's in a completely different art style, fitting to the era where it happened.

The only real downside to the issue is that it readers have to wait another month in order to figure out what actually happened, since the full betrayal isn't given away here, unless the whole "betrayal" was just Johnny playing a practical joke, which the issue weakly makes that point. Either way, this isn't as fulfilling as it should be.

FANTASTIC FOUR #6 is a prime example of how to continue an on-going story line while also tying into the big event. This series has been an incredible amount of fun that embraces the history of FF, instead of pushing it off to the side. Normally, I'm not a fan of this team, but Robinson's run is a lot of fun and a great overall read. In addition, the way it works with Original Sin is very cool and I cannot wait to see everything about what happened to Ben in the next issue. Overall, I highly recommend this series. 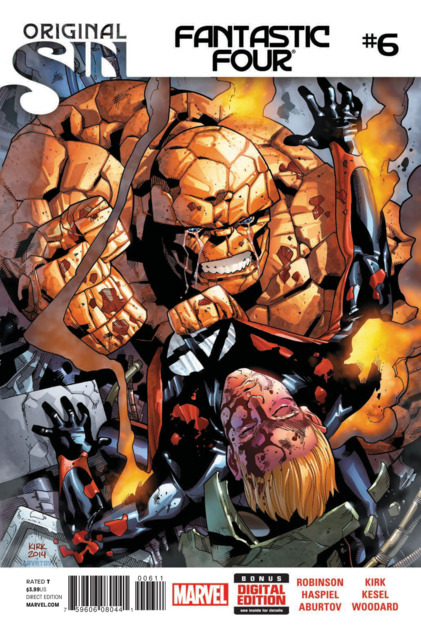