The Fantastic Four come face to face with an old adversary in the latest issue of their self-titled series.

The good news is that this issue is considerably better than the last. The story opens with a presentation by Valeria and Franklin explaining what the pair has learned from their father. Fraction uses this scene as the segue into their next big adventure: their trip to the beginning of the world, the Big Bang. Fraction captures the excitement of having the chance to see first hand the beginnings of the universe they live in pretty well, and he injects some very humorous moments into the story as well, which I felt was really great.

The story moves from light-hearted to, well, a little scary: at least for the characters in our story. Something is clearly happening to Ben, which we see from the get-go and it becomes more obvious (what changes Ben is having to go through) in the fight that ensues between he and his adversary. Aside from the fact that we see a Ben whose powers are obviously shifting, we also get a look first hand at why having two massive dudes get into an all-out brawl in the confined area of a space ship whilst floating in outer space is actually a really, really bad idea. This issue is all about action, and for the most part it's great fun.

Artist Mark Bagley's art in this issue is really consistent. His panels are clean and very pretty making the story fun to follow and easy to understand. He is really fantastic (no pun intended) illustrating this issue.

The last issue (the Age of Ultron issue) of this series depicted the Fantastic Four in a pretty serious situation, this issue sort of just disregards everything we saw previously, and that's somewhat strange. The fact that this issue takes a completely different turn is somewhat confusing: at what point in the timeline did the last issue of this series take place?

My only other complaint is that it doesn't seem the Fantastic Four took very many precautions when they brought on that hunk of alien space metal onto the ship. It doesn't make much sense as to why they would all step into a room with it, putting their own lives and the loives of the two kids in large amounts of danger.

Fraction delivers a lighter story that is a lot of fun at the start, but definitely shifts into a more somber and serious tone by the end. Although this issue doesn't start out being all about Franklin and what he is truly capable of, it certainly shift to being about that, in a really good way. The panels that make up the final page of this issue are absolutely stunning, totally minimalist and just perfect. It is a great way to round off the comic in a really pretty way.

Overall this is a really fun issue with very pretty art. The issue itself feels a bit disconnected with what we saw in the fifth issue, but I am holding out that we will see a resolution and an answer to what happened and how the events here fit into the greater storyline. This comic is pretty and well drawn and overall a lot of fun to read. I definitely recommend it, even if it might be a bit confusing for new readers at first. 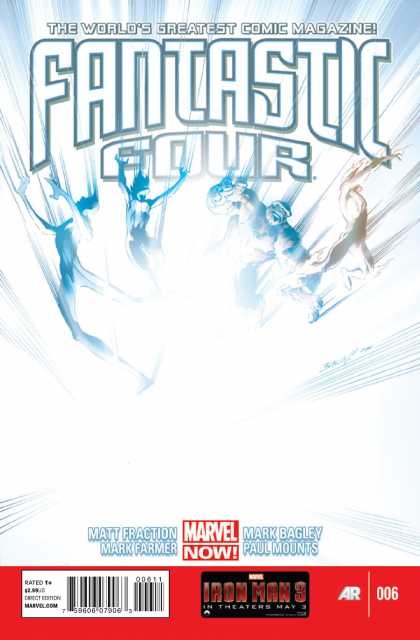