The story of why it's so hard for a tree to score a date.

If you have never before picked up an issue of FAIREST, you may want to start with FAIREST #14 considering it features a self-contained, single issue story. These are sometimes good to have (particularly when you are coming out of a multi-issue arc). It is also nice to have Willingham back on the title, since, I can't say I was a huge fan of the previous story.

The issue opens with Reynard T. Fox, the narrator of the story. He quickly introduces himself and establishes himself as the story's central character. There are moments where the character breaks the fourth wall and talks to the reader, pulling himself out of the story. It works very well here, actually, and gives the story a sort of interesting dynamic.

The issue is really a quick read, laid out pretty plainly and organized in a story that is pretty easy to digest. Probably the best part of the issue is at the very end on the last page where readers are given a rather interesting epilogue. The story's end seems to leave a door slightly ajar, allowing Willingham to come back to these characters and further explore their situation. It will certainly be interesting to see if, over time, the writer decides to do exactly that.

The first and most obvious thing I noticed was the structure of the panels on the first page. The layout is very abstract, and that is something rather consistent throughout. The layout of the first page, however, isn't the best. It's hard to distinguish what is going on. The panel layout does improve as the issue progresses, but I can't say I was a very big fan of the art in this issue. The pencils make the characters appear very rigid; not at all fluid. I was not a huge fans of the colors, either, to be honest.

This story was very simple and the issue is written in a way that is rather easy to follow and understand, but there is almost a disadvantage in that. The story feels almost a little too simple. There are two pages in particular (when the two characters are on a date) that feels a little bit drawn out. I understand it serves the purpose of making these characters uncomfortable, but in the end it becomes rather boring. I personally was not very impressed with the overall premise of the story found here.

Overall, definitely not the best issue of FAIREST I have read. Aside from the gorgeous cover by Adam Hughes, there was a lot that this issue was lacking. Although the premise of the story was kind of cute, and I did find myself chuckling at certain points, I did not think that it was Willingham's best. The art in the issue is very flat and has virtually no fluidity whatsoever. I did like that the Fox speaks to the reader in this issue, breaking the fourth wall and giving the comic a different dynamic. The reding experience feels different, interesting and fun. Having said that, the story itself could have been better executed. A self-contained issue and probably good for new readers to pick up, but definitely not something I would put at the top of my list. The issue wasn't bad, but it wasn't great either. 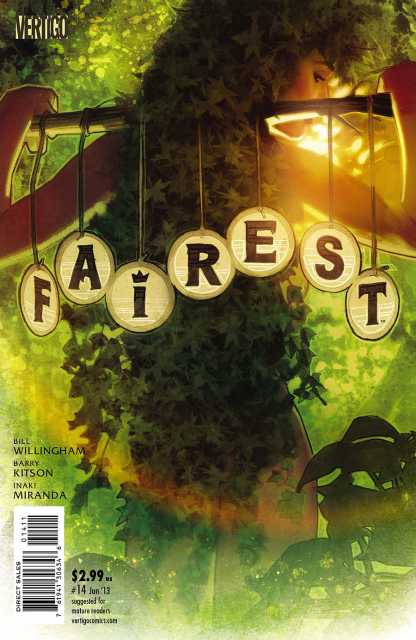