The X-Men team is still coming together. Nothing comes that easy, especially when the world still hates mutants and now Inhumans.

A good portion of this story deals with Old Man Logan being in this new Marvel Universe. He's confused and this issue really hits the point home that this Logan is not from this world's future. He's in an alternate timeline. He doesn't know about M-Pox or the Terrigen Mists. It's nice to see this book really set the record straight right off the bat. That's a question that really doesn't need to be in the reader's head since they're already wondering what happened in the 8 months after SECRET WARS.

Old Man Logan's story is probably the best part of the issue. We really start to feel for this character as this is his introduction into the new Marvel Universe. He has a lot weighing on his shoulders, due to the events of the OLD MAN LOGAN story and Jeff Lemire makes sure to reiterate that here for those who haven't read the story. Even if you're not familiar with that story, you still get a great sense of who this character is as Lemire sums up the events of Logan's journey. I have a feeling that Logan meeting up with Nightcrawler is going to be highly emotional when it actually happens.

This issue is chaotic. The latter half of the book jumps around a bit and creates a bit of confusion with the flow of the overall story. While these individual stories are great, the way it's paced out doesn't lend to the best flow for the overall issue. The dance between the fast and slow pacing isn't working for the particular issue.

Mr. Sinister?! Yes, please! Earlier this year, I talked about why I loved this character growing up, and I'm so happy to see this guy back in the comics. I really love the costume redesign by Humberto Ramos. It feels a bit more, dare I say, "sinister." He still has the gigantic cape and the diamond on his chest and head, but there's a little bit more to the costume than normal. It's a nice update to the classic, 80s/90s attire. It's hard to know exactly why he's here right now. He's obviously behind quite a bit of what's going on and I wouldn't put it past him to be behind M-Pox since he does love messing with genetics and probably made the virus himself.

Humberto Ramos is killing it on this series, along with Victor Olazaba on inks and Edgar Delgado on colors. The art is the perfect fit for the action we see here as well as the character beats throughout the issue. Ramos' style lends extremely well to these characters, and it feels like it breathes some fresh air into characters we've been seeing for years. In addition, the splash page showing off the new Mr. Sinister is downright awesome.

EXTRAORDINARY X-MEN #2 wasn't as strong as the first issue, but it was still a great read. Lemire is setting up quite a bit in this second issue, from Jean Grey outing herself as a mutant while trying to find love, Colossus and Magik fighting Sinister, and Logan talking to the new X-Men leader Storm, but it's all interesting set-up, although it does get a bit chaotic at times. Regardless, this is a real pleasing issue and I highly recommend checking out this new series. 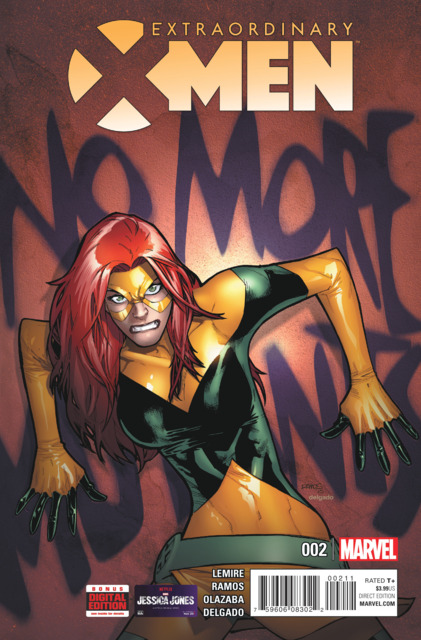