Eternal Warrior #3 - War on the Gods!

What has Xaran done to cause such turmoil between the Houses? All is revealed in this issue.

And so begins Eternal Warrior's mythos. Greg Pak spent the last two issues introducing us to Gilad's mystic world and threw a lot our way, but it was doing just that: establishing the basics. There were still a lot of questions to be answered and, in this issue, Pak goes all in and takes massive steps to flesh out this crazy world consisting of various Gods. Fascinating developments are made and the cliffhanger... well, let's just say it'll definitely keep you around to see what happens next.

This dark story of Gods, death and betrayal isn't all gloom and doom, though. Pak manages to throw some levity into the pages here and there. It's never enough to hinder the tone of the book or interrupt the narrative's progression -- it's just enough to put a smile on your face right before diving back into the violent fictional world. I don't quite know why, but the classic "cut away right before the hero slaughters a bunch of bad guys and then only reveal the sounds of chaos" tactic never gets old.

It's Gilad's name slapped across the cover, but this one's all about Xaran. We'll finally see what she's been up to this entire time and it's wildly entertaining (unintentional pun, I swear). Not only that, but it also grants Pak an organic way to unveil all of the elaborate details behind this expanding universe. Sure, it's a lot of exposition all at once, but it comes off as natural since it's something Gilad needs to know.

Trevor Hairsine's sketchier and grittier art works well with the more chaotic and darker scenes, but in calmer and more character-driven moments, certain aspects of his character designs become a bit distracting -- most notably the eyes. This becomes even more transparent when the book makes a transition to a much smoother style and then returns back to Hairsine. Additionally, another artist chimes in later on and the transition is abrupt and there's a significant drop in detail. Long story short, it's really noticeable and the fact it happened mid-scene doesn't help.

Minor gripe: the monster brutes from the Death Cult were ridiculously tough to drop in issue #1, so I couldn't help but tilt my head when Xaran drops one with a slash through the torso.

While it's not as action-packed or as exciting as the other issues, Pak dedicates the vast majority of this one to answering numerous questions we've had and even creating a few new ones. The writer's creativity is on overdrive as he continues to grow the fantasy world around Gilad while never really neglecting character development, either. I'm definitely looking forward to seeing where this all goes. 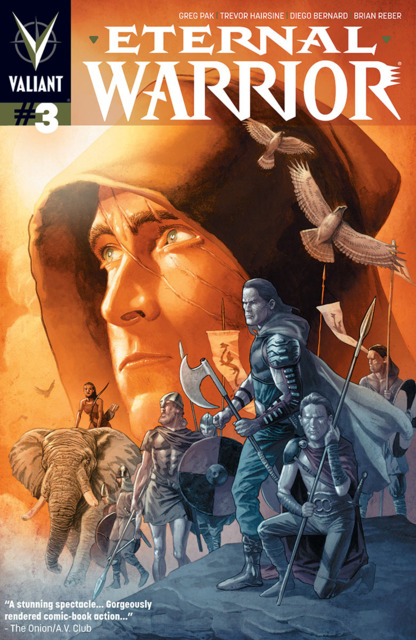