The latest chapter in EAST OF WEST brings thunder. And fury. And judgment without mercy.

Explosive action, poignant family drama, history, and political intrigue abound in this issue. If you haven't been pulling EAST OF WEST, go back to your comic shop and fix that right now.

Jonathan Hickman has perfected the art of layered storytelling. There's so much happening in this issue that it shouldn't fit into twenty-odd pages, but it does. The history of New Shanghai and the House of Mao is draped over a ruthless battle, and it's just downright calculated how well those panels play out. That house's patriarch may have wagered on a deal with the devil, but he's not the only one; every other scene in this issue is saturated with other such deals, and we're certain to see equally bloody endings to most of them.

Xiaolian may be my new favorite character in comics. She's brutal, she's ambitious, she's the woman who conquered Death. She's also feminine, merciful, and has a sense of honor as sharp as her sword; the word "Khaleesi" is totally relevant here. This book? It only looks like it's about the Four Horsemen. It's all about her.

Nick Dragotta makes this book as visually exciting as the story it's telling via carefully-crafted panel layouts and directorial angles. It's decidedly sequential (obviously), but feels cinematic in its movement -- especially with Frank Martin's splashes of fiery oranges and reds at high-tension moments (I'm also really digging the unchanging palettes on the Four Horsemen.)

I don't even have a complaint so much as a request: an annotated history of The World As It Is to go along with this book. There's only so much historical background that can be reasonably woven into the story without interrupting its pacing and turning it into an alt-history textbook, but those little snippets keep making me wonder "but what ELSE happened?" Also, more maps, please.

EAST OF WEST is absolutely my pick of the week, and as a series, it tops my pull list. It's astonishing how much Hickman and Dragotta have been able to fit into just four issues -- the world is bleak and scary, yet totally immersive, and the balance of violent action and tender emotional moments is carefully cultivated. 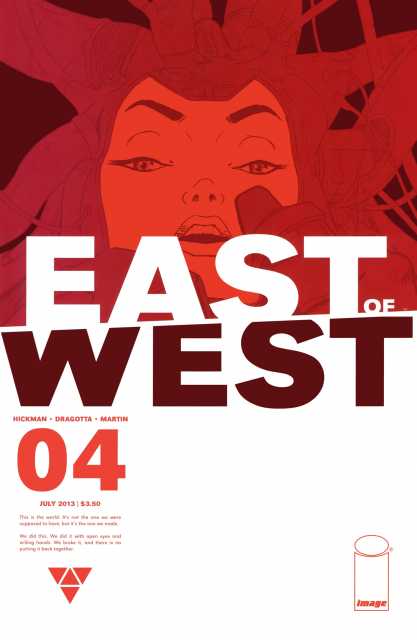