The latest issue introduces us to some characters we've already met and some new, unfamiliar faces.

Admittedly, Captain Pratt -- better known as The Atom -- isn't exactly a character I would look forward to reading in James Robinson's EARTH 2 series. In fact, he is probably the least likely of all the characters in this series that I had found myself really invested and interested in. That is, of course, until this issue. This issue starts off really well because Robinson gets readers invested and interested in Pratt's character right off the bat. It is here that the creative team digs into the character's history unlike any way we have seen previously. The character is pensive as he discusses his past illustrated through a series of flashbacks, and we see that war has really damaged him. It's interesting because we are given a hero who is vulnerable, in a sense. He's tired from war and he's damaged, and that makes him really interesting and relatable. Robinson also contracts some really beautiful dialogue in this scene that is just a really great pleasure to read.

Unlike what we've seen in previous issues, this one feels a great deal darker, grittier and more real. Reading this issue feels almost like reading a movie script. When we see the Atom in Phnom Penh being interrogated, for example, it is this scene that is not only written to feel really real and to draw the reader in, but it is illustrated and organized in a way that really emphasizes the grimness of that moment. Artists Cafu and Julius Gopez do a fantastic job setting up the scene on this two page spread to make you (the reader) feel like you are, essentially, in the moment.

If you are a big fan of action, too, you certainly won't be disappointed as there is plenty of that here, as well. Particularly in scenes featuring the Atom. Of course the additional incentive (if you aren't already reading this series) is the appearance of this Earth 2 Batman character who gracefully enters the story by swinging across two pages. Robinson's Earth 2 Batman is fantastic and every bit as dark and brooding as we would expect (and like) him to be.

This issue, overall, is really great. My only real problem with it is the fact that it doesn't feel like it really pushes the main story that we've been seeing in the series forward.

It's hard to say exactly what the highlight of this issue was for me. In a sense it was great to see some faces in this issue that we've seen in previous issues (think Kirby characters), but it was also really fun to get a closer look at the Atom. I think that up until this point the Atom has been utilized by Robinson but we haven't really seen why he is important or interesting, and we get that here. And although Batman may grace the cover of this issue, the real star in terms of interesting character evolution was by far Atom. Again, I would have loved to see more of Hawkgirl, and I hope we do learn more about her background in upcoming issues.

The art is great, and the story is a lot of fun to read. The issue is longer and it feels like Robinson really put some thought into the story he is telling and the way he organized the issue. He made good use of the pages he was given and does a superb job better acquainting the reader with the Atom's character. I didn't feel invested in his character before, but I definitely do now and that's a good thing.

Overall, great art, wonderful structure and a great superhero centric story. Although it may not be the best jumping on point, this is still a fantastic read. 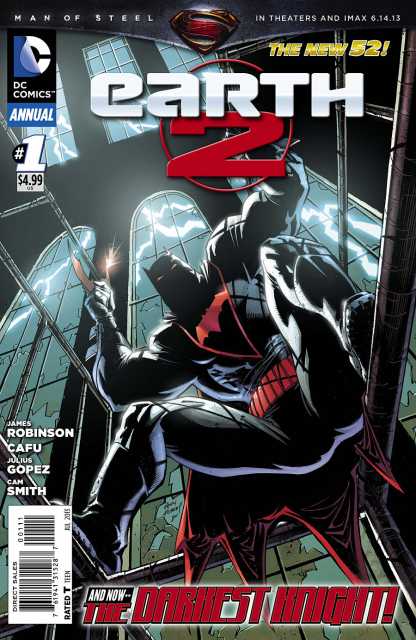