The battle is over, the losses are profound.

Endings are a tricky thing in comic books. Large events in particular traditionally have trouble sticking landings (Civil War, anyone?) but often the need to return to some semblance of a status quo can render endings impotent and almost meaningless. Clearly that is not the case here as this Earth has been irrevocably changed and no matter how the final battle went, there would be no simple return to normalcy. Normalcy has been dead since issue 1 of this series. Val-Zod confronts Superman and the two crash into each other with enough force to shatter mountains, but theirs is not the only battle. A massive Boom Tube is about to obliterate Earth and it falls to Marella and Jay Garrick to free the trapped minds of the architects of the horrible construct that makes it possible. Tom Taylor is bringing an exceptional amount of wit to the title, in particular the problem of Flash transporting Marella. Ironically, though, the best parts of this book have no humor nor wit as we see a newly powered Val-Zod confront the rampaging Superman and, in a shocking reversal of the usual trend, Zod maintains his promise of pacifism right up until the tragic end. Considering that almost every character who has a vow of non-violence across all fiction winds up betraying it "when pushed too far," or the "for the right reason" and I found this to be an incredibly refreshing and legitimately surprising development and one that I wholeheartedly support.

Nicola Scott ends this arc in typical, fantastic style. Her pencils in this are as good as they were in any previous issue, giving animation to the proceedings and emotion to the characters. I’ve loved her designs and interpretations of various characters, but seeing so many of them come together here is a true pleasure. Trevor Scott’s inks calcify the action, giving a crispness and sense of impact to the series of vicious battles, and even emphasizing certain moments of comedy when they come up. Pete Pantazis’ colors are beautiful and bright, communicating the tonal shift from the grim, horrific violence of past issues to one of uplifting hope.

First things first: the cover coupled with the solicitation makes me think this issue underwent a MAJOR change because both are total nonsense. Power Girl is not in this issue at any point. This is as close to an old-school cover where Superman would be killing Jimmy or conquering Earth on the cover only to have the interiors be about the Man of Steel buying eggs and finding out that one was cracked after he left the store as I’ve seen a modern comic get.

I loved everything about Val-Zod that happened in the conclusion to this story, but disliked a great deal about Superman. Without going into too much detail, what exactly happened and why it happened is entirely mystifying and doesn’t even have the barest hint of an explanation. It’s not quite to the level of the writer writing himself into a corner, but it’s close. Additionally, Marella states that she arrives at the final battle not for the World Army but for Batman. I don’t recall any kind of serious relationship forming between the two but even if I'm wrong, the notion that she wouldn’t turn up to help save the ENTIRE world, which INCLUDES the ocean, is a little absurd and seems to serve the cult of Batman a little too much.

This isn’t a perfect ending, but it’s a very good one. It takes a few missteps, but Val-Zod’s arc is ultimately incredibly satisfying and the visuals help elevate it as a whole as well. There are moments of levity and humor, which help contrast the ending, equal parts hope for the future and grim realizations, and it leaves the world in an incredibly interesting place. As long as you don’t take the cover at face value, this is a very satisfying end to one of the most tumultuous arcs in recent memory. 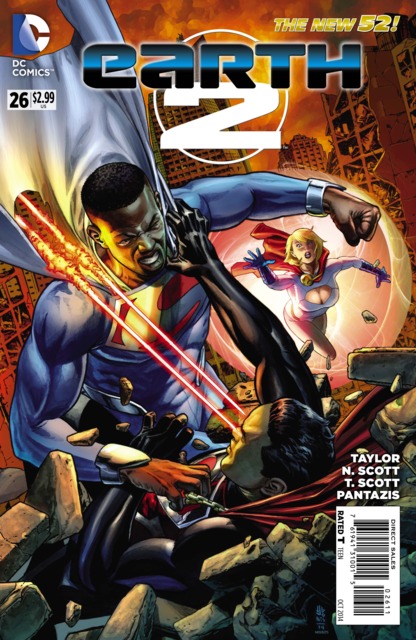