Think you know all about Earth 2? Things are changing in big ways.

At different points throughout the series, we've had some highs and lows with the action. Part of this was during moments of character development. With the reappearance of Superman (thought dead, as seen in the first issue), the action has amped up in a big way. We had moments of 'world building' but now, this very world is facing a bigger threat than they were prepared for. With Superman apparently on Darkseid's side, it's not good news for anyone. Tom Taylor has definitely hit the ground running with the series as is throwing big things at us, one after the other.

This is where we get to see what heroes exist on this world. As some try to pick up the pieces in the Arkham Command Center, we're seeing Jay Garrick and the "new" Batman try their own angles in solving the problem. This gives us a chance to get to know this new Batman as well as the new Red Tornado. With everything happening, you see the potential for different areas to be explored.

Nicola Scott draws the world like no one else can. As we're seeing a big shift in the tone of the series, it's great to still have Nicola's art to remind us where the story is taking place. There's even more new characters being introduced here and seeing her take is great.

We're only two issues in but it'll still take some time getting used to the new direction of the series. Seeing the return of different characters or simply having Superman and a Batman present (along with the new Red Tornado) feels like a complete departure from where the series was going before. It's absolutely intriguing to see what's being set up but the absence of characters like Hawkgirl or Alan Scott feels a little odd (although Hawkgirl is on the cover for issue 20). Will we see Mr. Miracle and Big Barda anytime soon? There have been quite a few characters already introduced and now we're seeing many more pop up. Again, we're only two issues into this change so there's still plenty of time to see what's headed our way.

There seemed to be an unofficial rule that characters that currently existed in the New 52 Earth couldn't have an Earth 2 counterpart. Besides Superman, this issue makes it clear that is no longer the case.

EARTH 2 has kicked up the level of action. We're now seeing more familiar faces and ideas which are interesting but also changes the vibe of the series we've had up until now. The feeling was there before but now there's a huge sense of having no idea what might happen next. Tom Taylor is flexing his writing muscles and there's no telling what changes we might see happen. Nicola Scott continues to give us the great art we're used to on this series. Seeing the different and new characters in her style makes it even more interesting. This isn't quite the EARTH 2 series you're used to but it's interesting to experience the changes that are happening. 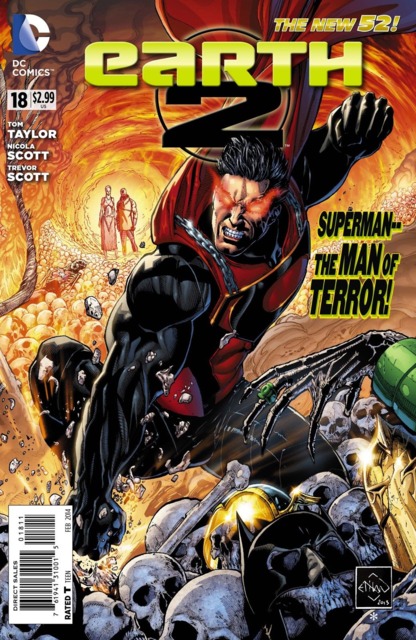