The time for talk has finished. Now comes the time for action, action, ACTION.

The Second Earth wasn’t so lucky to have defenders who stopped Darkseid’s invading forces with minimal loss of life, thus they ceded their fate to a brilliant, but utterly detached, madman who sacrificed millions to save billions, and Darkseid's forces were still given a territory to rule from. This has informed so much of the book’s tone and tenor, making it a much darker place than the prime DC universe, but in this issue we finally get to see the Wonders strike back and try to reclaim some semblance of safety. James Robinson has spent thirteen issues (and that doesn’t even take into account the 0 issue nor the annual) establishing his characters and showing us what kind of people they are, so the fact that this issue is either action or preparation for said action actually feels very, very earned. Green Lantern, Flash, and Dr. Fate storm Dherain, striking preemptively before the World Army can marshal their forces so that Alan Scott’s media empire can spin a war that will be easily won at minimal cost. The World Army, however, has plans of their own and when Atom and the (amazingly named, have I mentioned that?) Sandman Squad are there, along with the enigmatic and ruthless Red Arrow, tempers flare and egos clash. This isn’t a book that slows down to explain who’s who because if you haven’t read the previous issues, you really ought to.

Nicola Scott EXPLODES back into Earth 2, wasting no time from page 2, giving the reader a wild two-page spread of the massive assaults on Darkseid’s Lieutenant Steppenwolf’s territory rendered in all its bombastic glory. Alan Scott, especially, takes center stage, using both green constructs and wild bursts of energy to combat Steppenwolf’s footsoldiers while Flash takes things to a more personal one-on-one level and Fate provides both defense and offense. The toll of battle, the heart racing action, and even the more quiet moments are amazingly realized both with the illusion of movement, but also of time. There aren’t many pages to get the message of what happens across, considering how massive this battle is even at the outset, so Scott has to work doubly hard on ensuring the reader is never lost. Trevor Scott’s inks help keep everything distinct and emphasize the colors of Pete Pantazis, who makes sure not a single panel ever looks dull.

There are two separate two-page spreads across this twenty page issue, and while the first one is absolutely earned and epic, the second one borders on excessive. There are other pages that are almost spreads without quite making it there, and while the book has definitely taken on a massive scope, it can feel a bit light on content because of these.

The above complaint is minor at best. I’ll never fully object to more Nicola Scott art, after all, and this really feels like what the book has been building to. The battle is epic, we even get appearances from a couple of Earth 2 favorites that I didn’t mention because I don’t want to spoil, so there’s nothing stopping me from recommending this, besides the fact that if you haven’t been reading, you really should pick up at least the previous collected volume. The book is definitely predicated on a basic understanding of the situation up to this point, but I don’t necessarily think that writing with longtime fans in mind is inherently a bad thing. 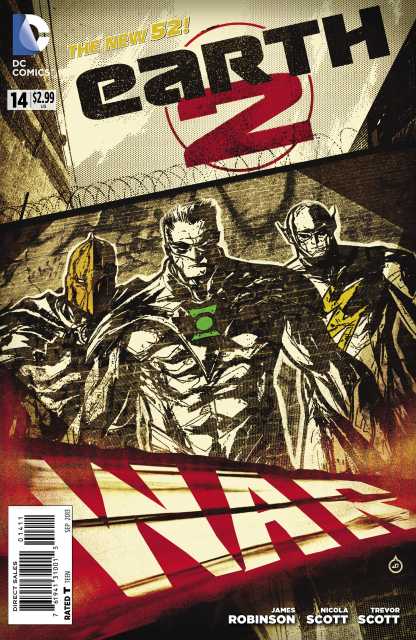