If you were a fan of the Golden Age character Commander Steel or more recently Citizen Steel, you might get a kick out of Captain Steel. In fact, Captain Steel might even remind you a little bit about another popular character in comics: Captain America. The origins of these character bear a striking resemblance in that both Captain America and Captain Steel were both very weak before they underwent a surgical procedure that led them to become these sort of Super Soldiers -- and that's, essentially, exactly what Captain Steel is. In this issue we are introduced to the character more formally and are given a bit of context and background on his identity and who he is today, and for the most part this is well done.

Captain Steel has a very "steely" reserve, and that's where he and a character like Captain America are seemingly very different. On the one hand, Captain America is a compassionate individual with a very strong moral compass: he essentially really cares about who and what he is fighting for and to protect. Captain Steel, on the other hand, is the opposite. To him it's just a job, and I think that is something that will really set him apart in the future stories of this EARTH 2 series.

For a good while I have been anxiously anticipating the appearance of and the continuation of Hawkgirl's story, and although it was not exactly what I expected to se in this issue, it was nice to see her have some time in the spotlight, even if it was only for a little while. Although Batman does make another appearance and he does sort of tell Hawkgirl what to do, it is HG who starts putting the pieces of the puzzle together. The scene is written in a way that demonstrates Hawgirl's abilities and strength's both as a fighter and a detective and I thought that was very well done. Still, however, it would't hurt to see more Hawkgirl.

There was a moment where Captain Steel's character was too obvious in the way he is written to communicate to the reader. Starting a sentence with "let me tell you a little bit about me," just feels a bit contrived and that moment sort of pulled me out of the story a little bit. I would have preferred it if that piece of dialogue was coming from someone other than Captain Steel, but that's just my personal opinion.

If there is one thing that James Robinson is good at it is leaving his readers in suspense, and the final page of this issue is a perfect example of that. Although James has multiple ongoing story lines in this series everything feels really organized, and that's one thing I really enjoy and have been enjoying about this comic. Reading this you never really know what to expect. The result is always surprising and exciting, and paired with the very pretty pencils by Yildray Cinar this has become one of the DC Comics I am most looking forward to each month. Although there were some moments in the dialogue that I felt could have been better written, I have been enjoying this story a lot. There is a lot going on and Robinson has been doing a superb job spacing out the story in a way that makes you keep coming back. 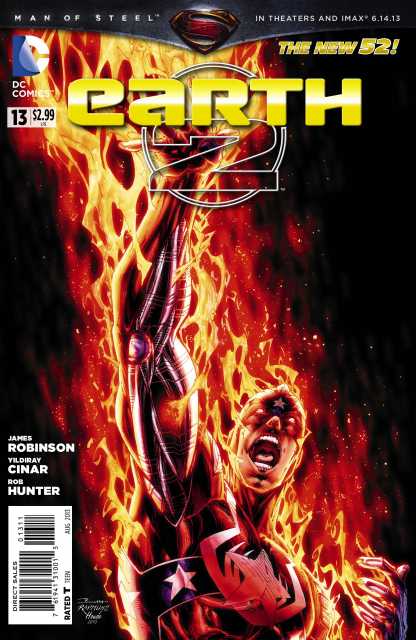