Get a look at what Doctor Fate is truly made of.

The issue opens told from the perspective of a television journalist who is recapping the recent battle between Earth 2's Doctor Fate and his enemy, Wotan. This is honestly a great way to open the issue, in my opinion, because it gives the reader the feeling of really being in the moment. The series writer James Robinson uses momentum in this scene to capture the excitement of the fight between the two characters that has been brewing through the course of the last two issues or so. The result is great, and the two page spread that opens the fight is once again beautifully illustrated by artist Nicola Scott and emphasized by the colorists on this issue.

One of the things I really found entertaining was the use of dual voices that speak when both Nabu and Khalid argue: I think it is something that is really well utilized and I am glad Robinson decided to create that separation within the character because it very obviously exists. It makes Doctor Fate a unique character and that particular scene is one that really enticed the reader to keep reading.

The story in general is a good one, and if you are looking for an entertaining superhero comic then you should look no further: this issue completely encompasses that. Having said that, one of the things I really enjoyed about this comic is the fact that it is written in a way that is very accessible to new readers. It is easy to pick this one up, follow along and be entertained. It is in general a well written, fun read that is complimented by some really lovely, vibrant superhero art.

My only complaint is that the understanding of Nabu's power came very easily to Khalid: I understand that he is thrust almost immediately into a major fight soon after he is given his new abilities, but in the same breath he also very quickly disregards Nabu's advice which could have been a really bad move. It also feels a tiny bit out of character for him, since, he had shown so much reservation in previous issues.

Some of Alan Scott's lines in the scene he shares with Kendra are a bit weird: the characterization comes across almost campy in a way and I was not very impressed with the dialogue. Scott's character really doesn't do very much for the scene in general, but it is eventually saved by Kendra's character who is not nearly as corny. The result is good enough, but I would have liked to have seen more Hawkgirl.

The issue opens with a lot of momentum, as I mentioned above, and that's really necessary to engage readers (both old and new) into reading this story. The result, in general, is pretty good. You are given some interesting characters who share some really interesting and entertaining interactions, and you also have a moment where Green Lantern (who had been adamant against teaming up with the other heroes) step onto the scene in a way that was interesting. Still, I would have loved to see more to Hawkgirl. I would have also liked to see how Hawkgirl was able to cleverly deduce what happened to Alan Scott's former lover and I hope that is something that we get to see more of later on.

This issue is also the first issue where these characters team up and work together towards a common goal, and it will certainly be interesting to see them further discover that they work better as one entity as opposed to alone. 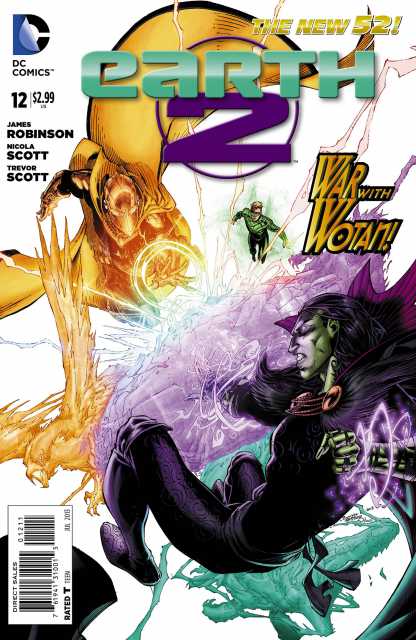