The latest issue delivers a surprise at every corner.

One thing that Robinson is very good at is setting up a story and background that will engage his readers: he does that here very eloquently from the start of the issue, opening up the story with the background on Waton's character. Readers learn rely on that Waton has lived many lives, but that each reincarnation of himself (or rather, herself) has suffered and been punished. He has had to live with "a skin like no other" like the "mark of Cain."

There's a really great moment shared between the Flash and Khalid where Flash demonstrates just how courageous he has to be, not because he is, but because his Mother is in danger. It is a very touching moment that says a lot about Earth 2 Flash's character: it clearly depicts just what kind of person he is to the reader, and Robinson does this without getting too wordy. The issue is very cleverly organized. As soon as we see a climactic moment featuring Jay Garrick, Robinson shifts gears and takes us back to Steppenwolf. This was absolutely perfect. If there is any moment that will keep you at the edge of your seat, this is it.

One character that I have always adored has been Big Barda, and to see her here in this issue is such a wonderful surprise. The way that she and Mister Miracle are introduced into this Earth 2 universe is perfect: it is in passing, and Robinson lets the artist tell readers for him rather than spelling things out. Not only that, but he establishes a rivalry from the get-go and plants the seeds for more exciting moments in the future. This moment and the one prior give readers back to back excitement making this one of the most exciting issues in this series so far, simply because of Robinson's ability to set up an interesting story.

The dialogue between Fate and Khalid might very well be the highlight of this issue. The eloquence of Nabu's words just lure readers in, sucking them into the story. Robinson outlines the scene beautifully, but also hints at Khalid's motives for wanting the helmet at all. The result is a gradual climax leading up to a truly fantastic moment.

Nothing really bad about this issue. I personally found this to be a nearly perfectly executed Superhero book.

Everything from Nicola Scott's art to Robinson's dialogue is magnificent in this issue. The story is organized in a way that will keep you turning pages, and leave you disappointed when you realize you've reached the end and have to wait another month for the next installment. Robinson does his best to ensure that he gives readers just a taste of all that is to come, and the result is pretty exciting. This is definitely one of the better issues in this series thanks to the way it is organized and the climactic moments that therein. I am definitely excited to see what Robinson has in store for us in the next issue. 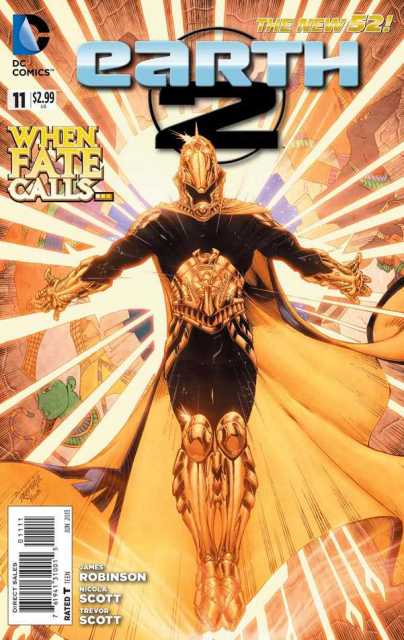