Who patrols the dreamscape and what dangers do they face? Detectives Joe Thursday and Frank Stanford are about to face an unexpected hitch.

The Dream Police are back!

In 2005, J. Michael Straczynski, through Icon Comics, gave us a one-shot story with art by Mike Deodato, that introduced us to the characters and concept. Like many, I was always fascinated with the idea and complexities of dreams. Having a police force patrolling was an great concept. Sadly, it was only a one-shot.

Staczynski has brought back DREAM POLICE through Image and Joe's Comics. The great thing for those that missed out on the 2005 issue is you can easily jump in here. Within the first couple pages through Joe Thursday's narration, you find out all you need to know. As Thursday goes out on patrol with his partner, Frank Stanford, you see the different areas they deal with and get a taste of what goes on while they're on the job.

Sid Kotian handles the art duties this time around. There's a strange and nice mix involved in this world. Kotian has the task of drawing a noir-type story mixed with all sorts of people and creatures--basically anything that could pop up in a dream. With others that "work" in the dreamscape and the tease of those in charge of nightmares, Kotian gives us a great feel of what we can expect in this realm.

For the casual reader, it might be a little difficult to get them to jump onboard. We have two characters here that they don't know or have a connection to. So if something pretty crazy happens to one of them, it might not have as big of an impact on them.

While this issue does introduce the characters and world, it doesn't really get into the focus of the story until the very end. If you've read the solicit for the issue, you know what I'm talking about. Seeing everything and everyone here is great but it almost gives the issue a slightly chaotic feel as it jumps around a bit.

If you've ever been fascinated with dreams or the idea of a dreamscape, this is a series you'll want to check out. We get to see two members of the Dream Police as they go about on patrol. This introduces us to different corners and residents of the dreamscape and Sid Kotian's art fleshes it out nicely. There's an interesting twist to the story but the impact might not be as powerful on those that haven't formed a connection with the characters. This issue just cracks the door open to the huge number of possibilities here. Don't miss out on this. 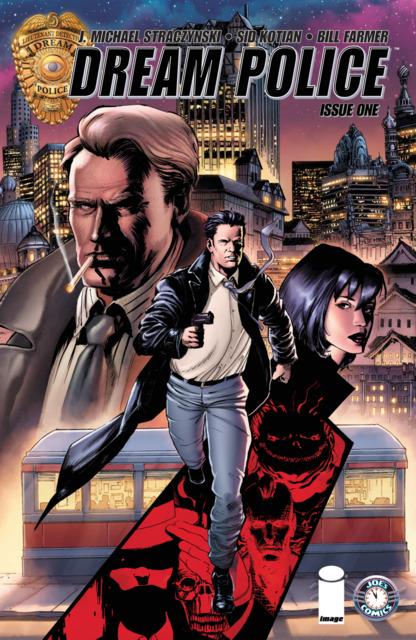