60 days after doomsday, the crew finds themselves face-to-face with some survivors.

The group of astronauts that survived the catastrophic event on Earth and drive around to find other survivors.

Problems aside, I am really enjoying this book. I like survival stories and seeing how different groups of people react to situations like the one in DOOMSDAY.1. Although it's 60 days later, (It says in the opening "Doomsday + 60," and it doesn't feel like 60 months later) these people are still adjusting to the new world. I like seeing this transition play out. These characters have to remain a bit more skeptical than normal because you're not sure who you can trust, but at the same time, they want to find other survivors. It's a bit of a double-edged sword scenario.

This is a John Byrne book. He wrote it. He drew it. Every ounce of it feels like Byrne's work. I know that may seem dumb and redundant, but this book has a great level of comfort to it because it's all Byrne. He has a unique style in his art and writing that harkens back to the 80s and 90s, which really fits this book. It's more of a contemporary story with classic execution. The book has a great pace to it, and it's a solid, front-to-back read.

While Byrne did the art here, Leonard O'Grady worked on the colors. Solid work throughout the issue, and I love what he did with the scene when Gordie was dreaming. Lots of fantastic, muted colors that highlight the fact he's in a dream state.

So the world has gone through an apocalypse of sorts, and it's been 60 days since the crew has been traveling around. They find themselves at a prison, and they have no problem just waltzing right in. Sure, they keep their guns, to be safe, but how could a group of "good folks," in 60 days, completely take over a prison and get rid of all the inmates inside? That's what these characters should be saying to themselves, but they don't. It's frustrating to watch all these astronauts, who are obviously intelligent people, waltz into a prison to meet their impending doom.

At the end of issue one, we see the astronauts on Earth after it has been desolated. In issue 2, we jump to two months later. The problem is that I want to see how badly Earth was destroyed. I want to be there, step-by-step, with the characters and experience every moment with them. Our crew seems to have no real problems with shooting up people now. Was there something we missed in those 60 days? Did something change them? Again, more frustrating moments with DOOMSDAY.1.

DOOMSDAY.1 is a decent book; however, it is a lot fun to read. I really like the feel of Byrne's art and writing here, and O'Grady's color work is fantastic. I'm very interested to see where Byrne takes this book and how it unfolds in the next few issues. On the downside, I had a problem with astronauts, whom are supposed to be intelligent folk, not being skeptical enough about the prison they enter. Also, I feel like we missed so much in that 60 day jump. I want to see how these people react to this new world.

Overall, I mildly recommend this book. 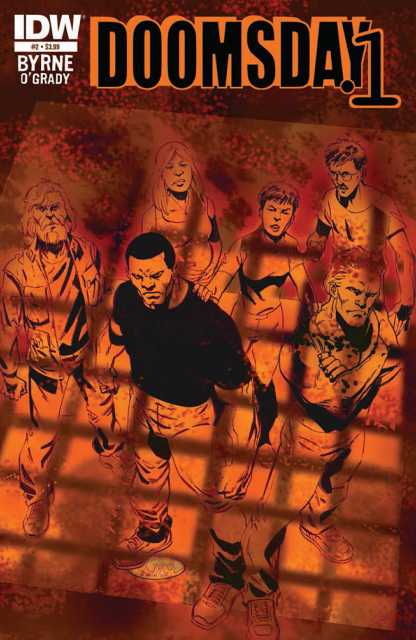