The Doctor finds out Robin Hood is real and so is a whole slew of danger!

Clara wants to see Robin Hood and the Doctor says he doesn't exist so they head to England back in 1190 AD to find him. The Doctor meets him right outside of the TARDIS. After a sword and spoon fight, Robin Hood brings the Doctor and Clara to meet his Merry Men.

The Doctor spends the time getting samples from the group to see if they're real. The Doctor finds out the Sheriff of Nottingham is wrapped up with some robots. But who are these robots and can the Doctor stop them?

The idea for this story is a bit silly and Robin Hood is a bit of a doofus, but it's great to see the Doctor go toe to toe verbally with him and make fun of him. The look on the Doctor's face anytime Robin does something is priceless. It's pure annoyance, which is exactly how I feel about a story about Robin Hood. "I'd like to see if his head keeps laughing if you chop it off" is my favorite line of this series thus far.

However, the back and forth battle of wits between the Doctor and Robin Hood eventually becomes a bit annoying. Briefly put, it becomes very "hammy." As much as one in particular scene bugs the living day lights out of me, where the Doctor and Robin struggle to grab some keys with their feet, Capaldi's tone and delivery are the only worthwhile things here. Yes, I will continue to praise Capaldi as long as he keeps getting me through rough waters in this show.

The Doctor has this obsession with Robin Hood only being a legend. He's dumbfounded with the idea that Robin Hood is possibly real. I don't get it. How could The Doctor's mind be blown with something as small as that? It turns into this heavy handed idea, at the end, that legends can be based on fact. It basically spells it out for the viewer. In this season, the writing team is treating their audience like idiots and over-explaining the themes and meanings of each episode. It's insulting.

Annoyances aside, this humor continues at the camp and what Peter Capaldi does exceptionally well is deliver some of these darker and humorous lines in a straight to the punch way. He says his line and moves on, aside from other Doctors who may make a bit of a "I just made a joke" face right afterwards. Capaldi's Doctor still has the sense of humor as previous Doctors but the jokes almost like a knee jerk reaction and less of him actually trying to be a jokester.

Clara continues to be a more developed character and less of a two dimensional companion. Her lines are a bit better in this episode and she's a bit more headstrong and independent instead of a character who struggles to do anything on her own and someone who needs the Doctor at every waking moment. This is the first time, in a long time, where I enjoyed Clara in an episode. With this and building on her relationship back in normal times, this may be a stand-out season for this character.

When it comes to the baddies of this episode, the robot designs are pretty darn cool. It's a great mixture of future tech and medieval awesomeness. It's also just nice to see a non-familiar enemy in this series. Although, this is technically the second time Doctor Who has gone to the "robot-well" in this series. Regardless, alien and robot design has always been a stand-out part of this series.

In the end, there are sappy, happy endings abound. Robin finds Marian. He thanks the Doctor and everyone is pleased. It couldn't be more silly and a forcibly happy ending. Once again, it feels like the writers are dumbing down this show to put smiles on viewers faces by wrapping up everything in the nice, little package, no matter how pointless it seems.

Expectations were insanely low for this episode because the previews for it looked incredibly awful. However, it turned out to be a fun romp, but not much more than that. Nothing is added to the "heaven" overarcing story which we saw in the first two episodes, and while there are lots of problems with the episode, it still ends up being pretty fun. Capaldi is nailing it as the Doctor and finally, Clara is worthwhile in this episode and given a bit of meat. Overall, it was a solid episode but not much more. 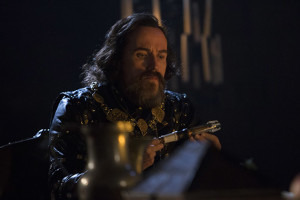