Doctor Strange #1 - The Way of the Weird; The Coming Slaughter

Jason Aaron and Chris Bachalo have your prescription for all your Doctor Strange needs.

Doctor Strange has never really had it easy. I'm not referring to the accident that caused the end of his surgical career which lead to him becoming the Sorcerer Supreme. In terms of comic publishing, it seems like it's often been tough to get fans to stick around. Doctor Strange is a great character. He's had some really cool adventures. Unfortunately if you ask Doctor Strange fans to name some of his memorable and truly great stories, there aren't too many to choose from. Doctor Strange sometimes just feels a little flat in the vibrant and colorful Marvel Universe. Jason Aaron and Chris Bachalo are ready to change that.

As the Sorcerer Supreme, you would expect some grand old adventures at every corner and always knocking on Strange's door. Within a few opening pages, we get a strong sense of what the job entails. This is a Doctor Strange that doesn't necessarily sit around his Sanctum Sanctorum waiting for things to happen. Aaron gives us a great taste of the craziness of Strange's world. It's easy to see how Stephen could sometimes be seen as a little stiff. It's likely he's keeping a lot inside or just simply digesting everything he's been through.

With this new series, we get a better feel for who Strange is. There are moments where the inner monologue is very telling. This is a guy that always has a spell up his sleeve to take on a threat that arises. But it's totally possible he might not have the exact spell at his fingertips each and every time. Aaron also introduces us to another part of Stephen's world. Magic clearly exists within the Marvel Universe and getting the chance to see Stephen with some of his peers is a good thing. Through the interaction and the other events in the issue, you can see that something big is about to go down. This is the kind of thing Strange usually deals with. We're just not used to seeing the spotlight on his adventures like this.

Bachalo's art captures the insanity and threat from other dimensions. At the same time, he easily shows us what the normal world is like and how the two, unbeknownst to us, merges together. It's almost like Bachalo is revealing a magicians secrets as we see Strange's world unfold throughout the issue. There's also a back up story by Aaron and Kevin Nowlan that further drives home the point that something bad is building up.

As this is the first issue, there are some minor questions and characters you have to wonder about. The book is clearly new-reader friendly so you don't need to worry about what happened in Secret Wars or the Avengers title. That also means we'll have no idea what has happened since a certain something happened in that event.

As a Doctor Strange fan myself, I've sometimes found myself distracted with some of the aspects to the character and his adventures. Jason Aaron adds some life to the character and delivers a brilliant mesh between a regular guy and perhaps the most powerful sorcerer on the planet. Chris Bachalo's art adds to this by easily juggling the depictions of a strange and dangerous alternate dimension with the city streets of Greenwich Village. We're off to a strong start in the All-New, All-Different Marvel landscape. This is the Doctor Strange we've known for years but it's been given the perfect dose to jumpstart the character in his new series. This book definitely has the potential to cure your bouts of reading boredom. 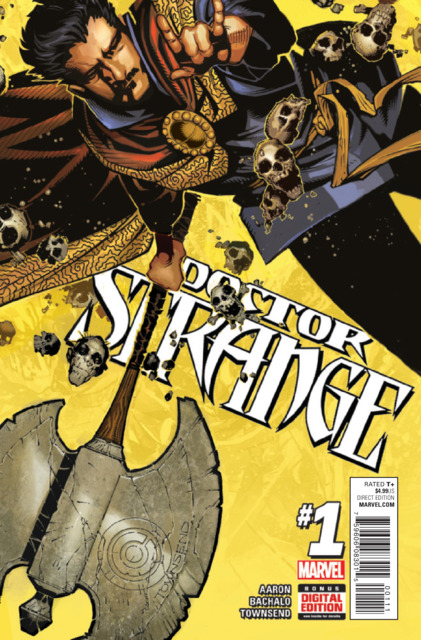