This is the first oversized volume of the adventures of the newest superhero you'll want to meet.

These days, we see so many new publishers and creators attempt to launch new comic book series. We've also seen celebrities try to add their input to comics and they rarely work. But then came Darryl DMC McDaniels. As a big fan of Run-DMC, there was no way I could pass on reading the first volume early. I enjoyed it. Getting the chance to podcast with DMC (HERE) and interview him (HERE) at NYCC just showed how enthusiastic and knowledgable he is on comics. But does that enthusiasm carry over into the comic?

This is your definition of new reader friendly. There isn't a thing you need to know before picking up this issue. You don't even need to know about DMC's rap career. This is a pure comic story you can dive right into. The first thing you'll notice is the art throughout the book. Normally, I'm not a fan of having multiple artists on the same issue. But this isn't just a regular issue. This is an over 70-page story (with a really cool cover gallery which I'll get to in a moment). It's divided into five chapters and we get the amazing art of Chase Conley, Jeff Stokely, Felipe Smith, Mark & Mike Davis, and Shawn Crystal (with inks by Khoi Pham). They even got actual graffiti artists for the backgrounds. The art simply works here and it works very well.

In the story by Darryl McDaniels and Damion Scott, we are introduced to New York City with a sort of alternate reality vibe. We see the DMC character first arrive and we don't know much about him. We see his is a hero and has some super-powers. As the story progresses, we witness more of the evils of this world along with other individuals with powers, some good and some bad.

It's easy to assume that because a rapper like DMC is involved with this, it'd be just one giant gimmick. That isn't the case. The story flows nicely. You'll have a great time reading it and there's something about not knowing what will come next. This is a new world we're seeing. There aren't any rules and I couldn't help but be excited with each turn of the page. Getting this comic in an oversized volume is also a great way to really be able to get into the story. With the average comic, you only get twenty-something pages, which is barely enough to really get into a story. Yes, you'll have to pay more for this but the number of pages, pin ups, and ad-free story is a blast.

As for extra content, there is an amazing cover gallery consisting of homage covers by several (more) amazing artists. I could eat these all up.

I mentioned the price. This is almost like a small trade paperback. You'll have to pay $19.99 but for a debut comic from a brand new publisher with an army of talented artists, it's definitely worth it.

Those not familiar with DMC can still enjoy it. Obviously there is that recollection if you're a fan of the music. If I were to strip away any bias or fondness for McDaniel, it is still a really good story. Is it a story for everyone? It could be but it might not be some people's cup of tea. It's worth a try for sure but the price might be a detractor.

When I heard Darryl DMC McDaniel was getting involved with comics, I'll admit I chuckled. We've seen many attempts by celebrities and musicians in comics. Much to my surprise, there is definitely something here everyone can enjoy. McDaniels and Damion Scott introduce us to an interesting new world where superheroes can exist. Seeing this alternate version of DMC is fascinating and throughout the story, we even get to see a transformation and evolution of the character. Adding to the story is an army of incredible artists, each taking a chapter in this 70+ page story. With real graffiti artists adding to the backgrounds, there's a great feel and look to the overall story. Because of the size and the format, there is a higher price tag that might deter some readers. But for a debut issue, there is a lot of charm and heart within these pages. I can't wait for the next volume. Be sure to track down this issue to check it out for yourself. 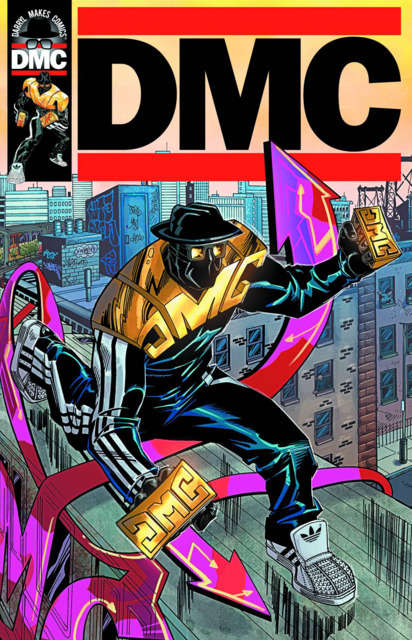