We know Joker's attack on Gotham has turned most people into Jokers. There are still others unchanged.

We've been digging the Endgame story in the pages of BATMAN. With a big game-changing story involving the Joker, you would think it'd be one crossing over into every single Bat-related title. Thankfully that isn't exactly the case. Instead, we're getting some one-shots relating to the other titles but not necessarily interrupting any current stories happening in those books.

We just saw DETECTIVE COMICS #40 last week, which wrapped up the Anarky storyline. It was clear that that story took place before certain events in BATMAN ETERNAL and this issue does feature Lonnie (the Anarky from the pre-New 52). It's really cool to see him following those events and where he's at right now. Unfortunately as one of the few unaffected by the Joker gas unleashed upon Gotham City, Lonnie is struggling for survival while trying to locate someone close to him.

What's great about this is Brian Buccellato lets us see the story from the civilian or everyman perspective. We know Batman's running around Gotham trying to stop Joker's plan. We also get to see some fan-favorite characters like Batwoman, Red Robin, Batgirl, and even Spoiler. (We may not know what will become of Spoiler by the end of BATMAN ETERNAL but it looks like she'll be somewhat accepted into the Bat-Family).

For a one-shot, you might expect some average art. That's not the case. Roge Antonio and Ronan Cliquet (who previously worked with Buccellato on THE BLACK BAT) do a nice job in the art department.

The story is a little straight-forward. It is great not seeing the book try to force a connection or have Joker at another location doing even more (like with the Death of the Family tie-in issues). Having Lonnie as a focus was cool and we're introduced to some other civilian characters. It'd be great if they were used again (like in the upcoming WE ARE ROBIN series). Otherwise, it felt as if they were too skilled for the average citizen. Then again, living in Gotham would cause you be ready for almost anything. It's also not clear how much time has passed between issue 40 and this one. The items they dig out of a dumpster for part of their plan probably wouldn't still be there.

There were a couple moments the shift in art was noticeable. It caused a slight distraction.

Normally when there's a big Batman event, we're forced to read a bunch of tie-in stories that have a more overwhelming feeling. Instead of forcing Endgame into other titles, like DETECTIVE COMICS, we get a cool one-shot that really gives a different angle on the story happening in BATMAN. Brian Buccellato shows us the story from the civilian angle, something that is too often overlooked. If you have an entire city being affected by the Joker's scheme, it's great to see its affects. Besides the story, we get some good art and cool guest appearances that really makes this stand out from your average big event crossover/tie-in book. 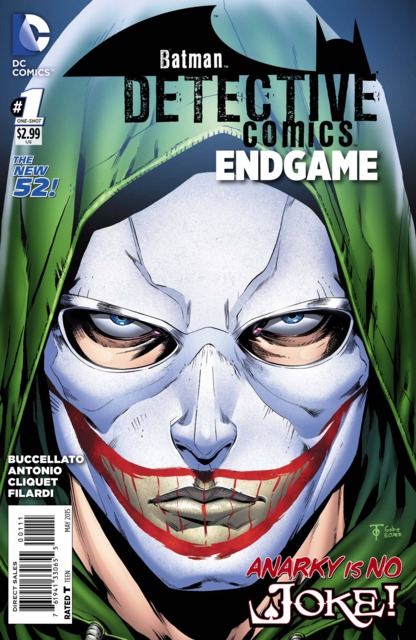