Batman takes on the gangs of Gotham to get Icarus off the streets.

At this point, I'm sounding like a broken record, but writer Brian Buccellato does a wonderful job at grabbing hold of the detective aspects of this issue and never letting go. Annual issues can be tough though. Does the creative team tie into the current events of the book or do they tell their own story? What Buccellato puts together here is a bit of a mixture of both. DETECTIVE COMICS ANNUAL #3 feels more like an introductory issue to Buccellato's and Francis Manapul's run on TEC more than anything else, which is a fantastic way to put together a book like this.

The issue revolves around Batman trying to get Icarus off the streets, at face value, that's the book, but it's a lot more than that. It delves into relationships between characters and how the criminal element of Gotham operates. There's one very specific moment which I completely fell in love with. A thug named Julian is chatting with a newer thug named Jonny, whose brother is big time, Julian explains that having an identity in Gotham is what's important. It's only a couple panels, but it perfectly describes why the criminal element of Gotham is the way it is. It's not because of Batman. It's because everyone wants to be someone.

Back to Julian, it's awesome to see one of my favorite Batman Rogues before they became the person fans know them as. Julian has yet to take his own advice, but we see that small moment where he realizes he can be more than just a powerful thug, while laying on the ground after a beating from Matches Malone. Yes, I'm admitting I love Calendar Man.

One thing that was very interesting about this issue and the majority of this series is the lack of inner-dialogue coming from Batman. In Scott Synder's BATMAN, the reader is in Batman's head from the first to last page. Here, the reader can only see what's happening on the page and read what he's actually saying. It's a really interesting way to attack this story and character. It's a very different perspective for the reader, a detective story where the character's thought process isn't spelled out on the page. It's a challenge to the reader, which is an exciting part of the book.

There's some great art on this book, even though there's three different art teams. Each team fits their respective story well. Werther Dell'Edera and Scott Hepburn do some great work, but this book truly shines with Jorge Fornes on art and Jon Proctor on colors. There two seriously do one hell of a job, and while Fornes' style is really cool and has a great way of getting the story across, Proctor just kills it on colors. His style matches the on-going series, to a degree, so it really feels like it fits with the main book.

The only real downside to the issue the the fact there's three different artist teams on the book (artists and colorists). On their own, all of the artists are great, but when placed into the same story, even though each team covers one smaller story here, it feels a bit chaotic and jumpy. However, it does read better a second time.

Annuals are hit or miss, but DETECTIVE COMICS ANNUAL #3 is a big hit. It feels like a great introduction to the on-going series and presents a ton of elements fans are familiar with. TEC ANNUAL gives fans a taste of the main book, while getting deeper into the Gotham criminal underground. Most importantly, to me, Calendar Man makes his mark in an actual comic and not just stuck in the back ads. Overall, this is a really fun issue and great annual. 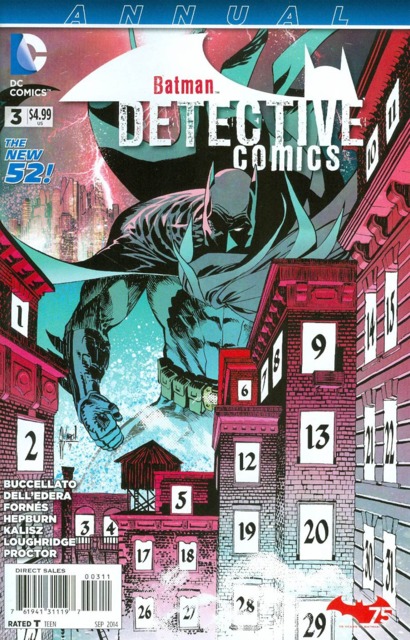