Can Batman and his allies put a stop to the Victim Syndicate?

This series continues to stray from the typical Batman formula. With Batman working with others, we're seeing him in a different light. Batman has worked with teams in the past, but this has a different feel. We even see a flashback with Batman and Tim Drake discussing the notion of this team and how Batman sees it as something different. This is a great start for the issue as it gives an idea what you can expect.

Many Batman stories are full of action and excitement. James Tynion IV gets a little more analytical with the characters here. The whole notion of the Victim Syndicate and the possibility that Batman's presence in Gotham causes more harm provides some interesting things to think about. Tynion also delves into the thought process of others like Stephanie Brown and even Clayface. I continue to be amazed at how much Clayface has been fleshed out and the fact that I actually care about him now. Also, with one single panel and comment, you're reminded why Batwoman is such a kickass character. This issue may be a little lighter on the action, but there are several great moments. Of course we get a crazy cliffhanger as well.

Eddy Barrows' pencils with Eber Ferreira's inks and Adriano Lucas' colors continue to dazzle me. It's such a joy when you have a solid creative team on a title. You can dive into the intricacies of the story and have your eyes rewarded with great visuals.

This isn't your regular Batman comic you might be used to. By having Batman ally himself with others in the Bat Family, there is so much more to see explored and developed. Barrows, Ferreira, and Lucas are doing an amazing job with the art and color. How many different Batman stories and titles have we seen over the years? James Tynion IV and crew make Detective Comics stand out from the others. 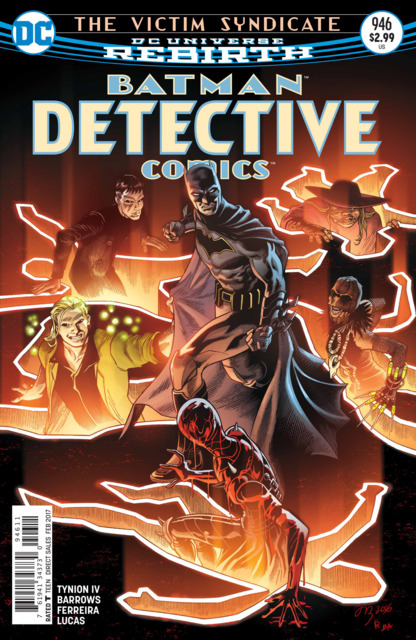