Detective Comics #940 - Rise of the Batmen Part Seven: The Red Badge of Courage

The battle against Batman and his allies takes a dark turn.

James Tynion IV has kept the twists coming as the story moves at a rapid pace. Batman has teamed up with Batwoman and others in order to prepare for the threat of the Colony. Discovering who was behind it was was a big blow, but the threat they pose to them and Gotham City must still be dealt with.

Batwoman has moved towards the center of the spotlight in dealing with their foe, but it's Tim Drake that is putting everything on the line now. Tynion's story showcases a battle on two fronts, and each has hard-hitting blows with some serious consequences looming in the background.

The hard-hitting blows aren't just felt by the characters in the title. Long time fans will find themselves on the edge of their seats, fearful of just how the first arc will end. Tynion knows how to amp up the intensity of the story. There's a lot at stake, and you almost feel like covering your eyes instead of witnessing what happens next.

Eddy Barrows' pencils combined with Eber Ferreira's inks and Adriano Lucas' colors continue to be top notch. You can see and feel every beat of the action as well as get a great sense of the emotion pouring off the page when a tragedy occurs. There are some silent panels and pages that deliver so much with the visuals.

Detective Comics concludes its first arc with a powerful ending. James Tynion IV, Eddy Barrows, Eber Ferreira, and Adriano Lucas have consistently delivered a great Batman story with the Dark Knight taking a new direction. We've seen the different characters fleshed out without getting lost in the crowd, and the action moves the story at a brisk pace. The finale will grab your attention and leave you speechless as you reach the final page. Tynion and company are doing great things here. This is a book you shouldn't miss out on. 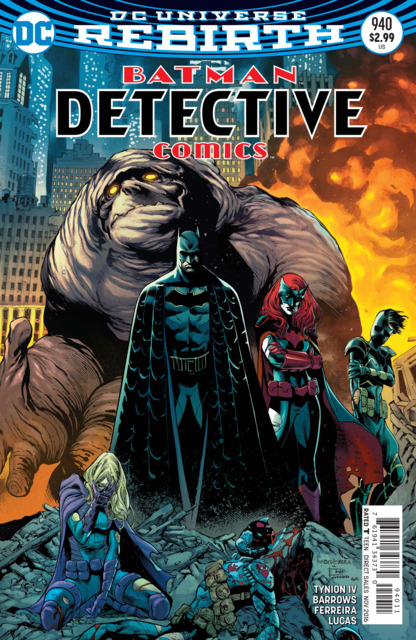