Batman runs into a big problem and the rest of the team gets an unexpected surprise.

This isn't your typical issue of Detective Comics. With this Batman title focusing on his decision to bring in Batwoman and others to prepare against a new threat, we're seeing Batman operate in a different fashion. Their plans to face their new foe took an unforeseen turn when Batman faced the threat of the Colony sooner than expected.

James Tynion IV is keeping us on the edge of our seats. There's a nice air of mystery throughout the issue. Just when you think you have an idea where things are going, the story sharply veers off. The pacing feels like the events are unfolding faster than you would expect. This shows that Tynion isn't messing around. There's no need to drag things out, and we can assume he has a nice master plan in mind for this title.

When titles contain several characters, there can be a muddled or jumbled feeling. That isn't the case here. Batwoman is taking over the main focus with Batman missing. The small moments we see with Stephanie Brown, Cassandra Cain, or Clayface clearly shows who they are and where they fit in here.

Alvaro Martinez's pencils are phenomenal. With Raul Fernandez's inks and Brad Anderson's colors, each page is a spectacle to behold. Whether it's Kate trying to have a simple conversation with Renee Montoya or Cassandra Cain taking on a horde of enemies, everything looks so crisp and clear. This is an issue I found myself looking back over after reading to make sure I didn't miss out on anything with the art.

Each issue of Detective Comics has been a fantastic read with the Rebirth relaunch. James Tynion IV is shaking things up for Batman and his allies and keeping readers on their toes. With juicy twists and turns and a fast pace, you can't be sure what to expect. The art team of Alvaro Martinez, Raul Fernandez, and Brad Anderson will put you in awe. What makes reading Detective Comics even better is the fact we get it twice a month. It's a tough wait between the issues, and as soon as you finish, you'll be hungry for the next installment. I have to say, I love this book. 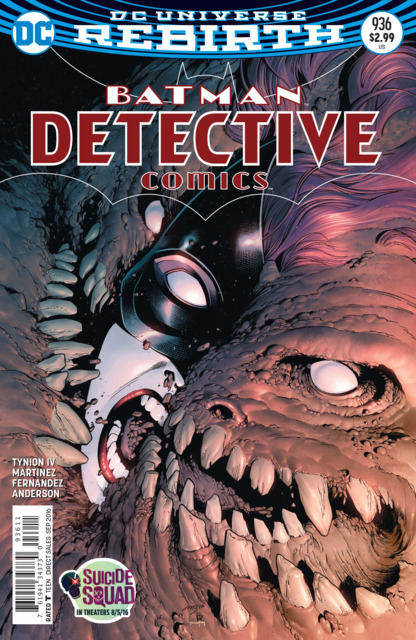