Francis Manapul and Brian Buccellato are back and they've brought Anarky with them.

Note: Brian Buccellato called me a "mean-spirited jerk" on a phone interview right before this was published, yet I still loved the story.

It's surprising that three years into the New 52, there are still pre-existing characters we haven't seen or don't know anything about. Anarky is a great example. First appearing in 1989, he was a Bat-foe that had a specific angle and motivation, unlike many of the others. Anarky has been seen once before in the New 52 Universe in the pages of GREEN LANTERN CORPS #25. If you're wondering why that is, it was the Zero Year story focusing on John Stewart in Gotham City.

Is this the same Anarky character? If so, what has he been up to since Zero Year? (This is a question we'll likely find out in the arc and something I did ask the two in an interview coming up shortly). Anarky's appearance here immediately sets up the tone of the character. Basically, you do not want to mess with him or get on his radar.

Having Francis Manapul and Brian Buccellato as the storytellers is fantastic. They seem to create their own world and seeing Batman in action, even against someone like Mad Hatter, looks gorgeous. The lighting, weather, settings, shadows, etc, all look amazing.

Reading this issue is an experience. And it looks like we'll be getting more butting of heads between Batman and Harvey Bullock. More Harvey is a good thing.

First issues of new arcs always have to set everything up. Seeing Anarky here doesn't let us know what specifically he's after or why he's showing up now after so many years (if it's the same character). We're just getting a taste, which is totally fine. There's always that slight disappointment when a character is on the cover and only has a brief physical appearance in the book. Although his presence is clearly felt towards the end of the issue.

We can assume this story/arc is taking place before the current happenings due to the appearance of Wayne Manor and Wayne Enterprises. We shouldn't get hung up on continuity but sometimes it can be an unfortunate distraction.

There's a couple minor things (that don't really influence the rating) but it seemed a little odd that a Wayne Enterprise employee was tied to a pretty bad thing and Batman (or Bruce Wayne) didn't look further into it (yes, he is busy and all). The other thing was Wayne Enterprises having a "smart office building controlled by a network." Obviously that can lead to problems.

Francis Manapul and Brian Bucellato have been missed and are making it up to us. With a new story arc beginning, we see the New 52 version of Anarky in town and he's not playing around. Batman will definitely have his hands full and hopefully will figure out how to get along with Harvey Bullock. The art and colors are as gorgeous as you'd expect. Manapul and Buccellato are great tour guides. Their work makes you want to visit Gotham City the way the depict it--even if there's people getting killed and buildings blowing up. 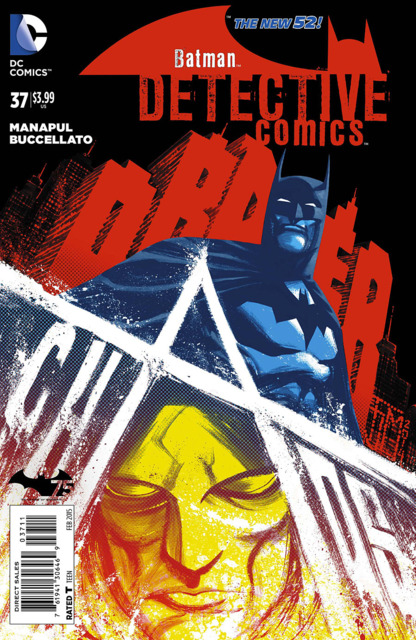