This is the Batman book I've been waiting for. It's so awesome to have two Bat-titles that are on the same level as each other, and that level is top-notch story telling. As I've stated in previous reviews of this book and on the Comic Vine Podcast, DETECTIVE COMICS heavily focuses on the detective aspect of Batman. While some may think to themselves "duh," those who have been reading the New 52 volume have noticed the series moved a bit away from that aspect.

The real star of this run, thus far, has been Harvey Bullock. He's written extremely well and feels like a real person. Too many times in the past, he's come off like a bumbling fool/yes man or a way over-the-top tough guy. Here, he's a cop with his own moral code. That tough as nails attitude is still coming through, but what makes him really stand out is that he isn't afraid, not even of Batman. He's like a cop from a noir film not caught up in his own inner-monologue nor is he cartoonish. Bullock is the coolest part of DETECTIVE COMICS.

Francis Manapul and Brian Buccellato, as storytellers, have truly taken DETECTIVE COMICS to new levels. Artistically, it's one of the most intriguing books on the shelves. At no point, during this issue does the artistic story telling become confusing or muddied, which has a greater chance of happening when artists take bigger chances on their panel to panel story telling.

There's one particular page (technically a two page layout) that really stands out. Batman is spying on some rednecks in their secret base, like he normally does. In the upper left corner of the page, there's Batman hanging upside-down, checking things out, but not held within a particular panel. Then three panels of the area. Certain clues and things Bats is focusing on have their own circular panel highlighting the clues. It gives the page a real cool flow to it and once again, makes this scene a stand out detective scene.

It's a bit tough to understand what's going on in the final pages of this issue, with Bullock and Batman. I was a bit confused what the deal was with the pink, glowing man. Although I've been reading this run, I feel a tad lost.

Note: The glowing man appeared in issue #31 as well.

This issue and story line puts the "detective" back in DETECTIVE COMICS. This issue may not be filled with tons of action or giant, blockbuster explosions, but what it does have is a compelling story that the reader will not be able to put down. Since the focus is primarily on Batman's process, the reader gets to see things through his eyes as he compiles clues. Believe it or not, it's riveting stuff and gives us a new look on this old character. Overall, I highly recommend this issue. 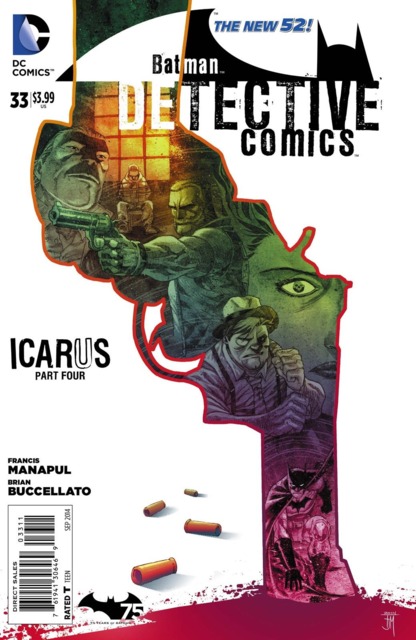