Batman and Harvey Bullock are both trying to solve a murder. Too bad they can’t work together.

Francis Manapul and Brian Buccellato are continuing their murder mystery in Gotham City. Within just a few issues, they’ve immediately grabbed the reigns of this series and are taking Batman on a wild case. With “detective” being in the title, it’s great to see a focus on the actually detecting that goes on during a murder investigation. Not only do we get to see Batman do his fair share of investigating, we also see what Harvey Bullockis capable of. Harvey is a character that has long been underused, especially in the New 52. Having him step forward into the spotlight a bit has been a blast.

Speaking of Harvey, while we do get to see him in action, we also discover a little something about his personal life. I don’t know if it’s something that’s been mentioned before and I just overlooked or forgot it but it’s a nice and interesting addition to Harvey’s character.

The art and colors go hand in hand with the story. Manapul and Buccellato take us in different directions and to different locations as the story unfolds. We still don’t have the answers everyone is looking for but that’s the fun of this ride, watching little clues get dropped and waiting to find out who is responsible. Whether Batman is having a simple conversation or in a crazy fight against a giant squid, everything looks gorgeous. The issue ends with a great cliffhanger that makes you look forward to what will happen next month.

Maybe it’s just another part of the mystery but I can’t quite get a firm take on Annette Aguila. She may have lost her mom and is in a bad place but I feel we haven’t had a chance to really get to know her since tragedy struck so quickly. I don’t know what to make of her and what her role in this story will be. I don't feel a real connection with her so far.

If you’re looking for some detective action, DETECTIVE COMICS is now living up to its name. Batman is the World’s Greatest Detective so it makes perfect sense for Francis Manapul and Brian Buccellato to place an emphasis on this. Seeing Batman and Harvey Bullock, separately, investigate a murder is intriguing. We’re seeing more pieces of the puzzle revealed but there’s still plenty of mystery to unravel. Manapul and Buccellato’s art and colors continue to amaze. Not only is this a great story but it’s accompanied by gorgeous artwork. If you’re not reading DETECTIVE COMICS, you need to fix that now. 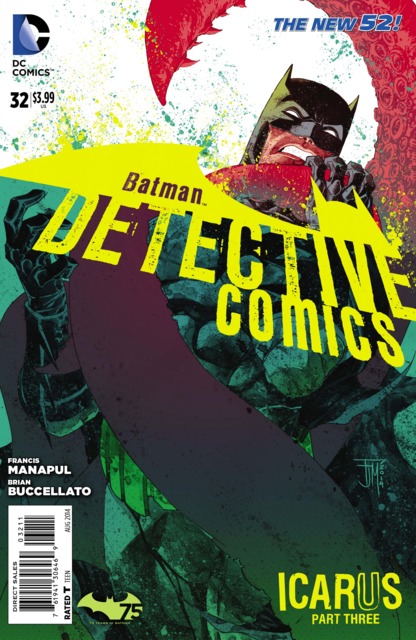