Francis Manapul and Brian Buccellato are ready to hit the streets of Gotham City as they take over the title.

I think we can all agree it was a sad day when it was announced that Francis Manapul and Brian Buccellato were leaving THE FLASH. They proved time and time again that not only did the two make a great art team with gorgeous layouts and colors, but also a pretty rad writing team. What made their departure bearable was the fact that they were moving to Gotham City to take over DETECTIVE COMICS.

There are a lot of Batman comics these days. The great thing about this issue is we get a sense that this could be a different type of Batman comic. That isn't to say the others are not everything I could ask for. We're all riding high on the fun and excitement in Snyder and Capullo's BATMAN, but thankfully, Manapul, Buccellato, and DC didn't try to simply give us more of the same. I like variety in my comics, even if they contain the same character.

What we see in the first issue, aside from the great art and colors, is a different look at Gotham City in the New 52 Universe. It might be tempting for a new creative team to start off with a familiar or popular villain but Manapul and Buccellato are following up on a thread they created in their Zero Year issue in THE FLASH #25. We often get to dive into Batman's head by seeing his inner monologue but the absence of that here also contributes to the different feel.

The detail in the art and colors just might bring a smile to your face at different moments, something a Batman story shouldn't really do. Manapul and Buccellato are mixing things up while also introducing some new characters and antagonists.

As enjoyable as this issue was, it could be said that the pacing was a little odd at times. It almost felt as if we were jumping from scene to scene. We are introduced to some new characters but don't really get a chance to really get to know them. If only the comic could be just a few pages longer.

There is an intruder at the mansion and Bruce checks it out in his Batman pants and boots without a mask or shirt. It was likely a matter of time but he should've either put on the cowl or changed his pants.

Francis Manapul and Brian Buccellato have moved into Batman's territory and we all have reason to celebrate another great Batman comic. There is a different feel to this comic as readers are treated to a different sort of Batman comic. This is a great sign that we don't always have to have more of a good thing. We can have more but given in a different sort of way. Manapul and Buccellato are off to a great start and we can all hope they decide to stay in Gotham for as long, or longer, as their run on THE FLASH. These days, it's a good time to be a Batman fan. 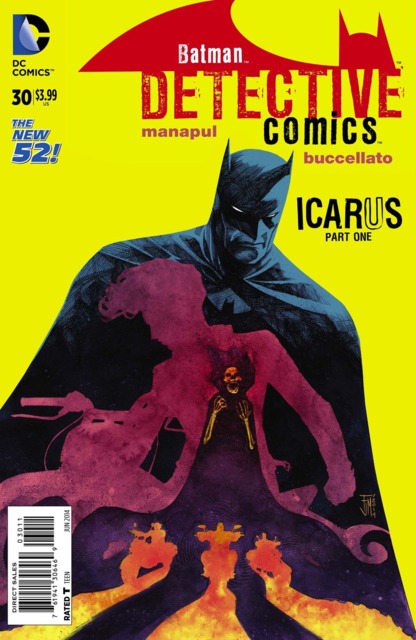