It's a huge anniversary issue. It's like a Batman party here and a bunch of creators and joined in the celebration.

It makes sense that DC Comics would honor the milestone issue of DETECTIVE COMICS #27. As pretty much everyone knows, in the first volume, that was the issue that marked the first appearance of Batman back in 1939. With this being volume 2, we get to celebrate that first moment.

The first thing you'll notice is this is not an ordinary sized comic. It has a $7.99 price tag but it's so big, it required binding to keep it together instead of a couple staples. There is a lot of content here to make up for the price. The features run 15, 10, 10, 4, 5, 27 and 12 pages with pin ups in between. The stories are written by Brad Meltzer, Gregg Hurwitz, Peter Tomasi, Francesco Francavilla (also doing the art), Mike Barr, John Layman and Scott Snyder. The art (respectively with writers) is by Bryan Hitch, Neal Adams, Ian Bertram, Francesco Francavilla, Guillem March, Jason Fabok and Sean Murphy.

The range of the stories vary. Most importantly, Layman's story is the beginning of his final arc on the series, Gothtopia. It makes sense that it is the longest one (at a fitting 27 pages). It's a fascinating look at Batman and you'll definitely get hooked into the story. Fabok's art goes along with it perfectly.

Scott Snyder and Sean Murphy's story also offers a pretty insane look at the possible future of Batman. Trust me, it's not like any that we've seen before. We absolutely need to see more Batman from these two.

Peter Tomasi offers another potential future story which ranks up there with the two stories mentioned. Not only do we see Batman but others in the Bat-Family as well.

Were all these stories necessary? Some of the others were just okay. We could have done without most of these. The "retelling" of Batman's origin doesn't make any sense with Zero Year. I didn't see the point in starting the issue off with a completely out of continuity story dealing with what we just saw a couple months ago in BATMAN. Layman's Gothtopia story should have been at the beginning as it's what matters most, being part one of a three part arc. Some of the other stories felt a little cliche. They were a little fun and interesting. But I've heard a lot of people skipping this because of the price.

A big frustration was the lack of the Paul Dini/Dustin Nguyen story. To this very moment, it's still listed on the solicit on DC's website. It's a shame when things like this change and we are not informed in advanced. How long ago was the issue actually printed?

It's DETECTIVE COMICS #27. You almost owe it to yourself to pick it up if you're a Batman fan. A milestone/celebration like this doesn't happen often. Unfortunately while there were some really great stories with fantastic art, some of the others felt unnecessary. Asking fans to pay eight dollars when we just had an over-sized issue with #19 is a bit much. Still, you'll want to check out what the different creators came up with. Some of the stories really shined and you won't want to miss them. 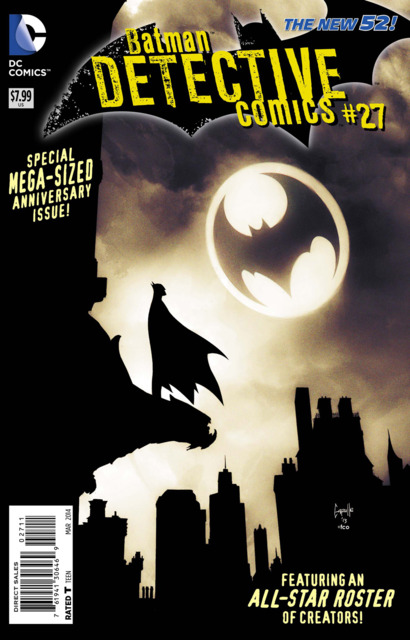