There's a deadly assassin in Gotham. How could she be connected to Batman's past? And find out what Harper Row's fate will be.

I've been enjoying the Emperor Penguin storyline but I'm thankful to see a different threat take the center stage. In what seems like a typical assassin-comes-Gotham story, we soon find out there's much more to the mysterious assassin. John Layman is quickly becoming the Master of Continuity with several key mentions to current Bat-events. You also have to wonder if the mention of 'assassins' will have anything to do recent events in RED HOOD AND THE OUTLAWS...

The assassin here happens to have a deeper connection. Is that too coincidental? If so, it's fine with me. I love where Hickman takes the story and how it ties this all together. The opening pages gets me even more excited for future events.

Then of course there's Harper Row. It seems many are conflicted when it comes to her character. People either love her or hate her. I'm on the pro-Harper side. What is her fate or destiny in the future of Batman comics? I'm not too concerned with her future but more focused on what her present situation is. Layman fills us in on what she's been up to since Batman gave her a firm talking to after Damian's death. I'm fascinated with what is being done with her and can't wait to see where she'll turn up next...if she survives this issue.

Layman and Andy Clarke also continue the story of Kirk Langstrom and his recent Man-Bat problems. The story isn't over and there's some big implications building.

While I did enjoy the main story, I am a little torn over whether or not the assassin's presence in Gotham is too much of a coincidence. The killer had been out of action for quite a while and their first mission happens to be in Batman's backyard. Still, it was a fun story.

Scot Eaton's art works for the most part. There are just moments where Harper and her brother look a little...older.

Hopefully you are caught up on BATMAN: DARK KNIGHT. While Layman continues to give nods to events in other Batman comics (which is great), a pretty big event was mentioned.

An assassin comes to Gotham and of course Batman will soon get involved. We'll soon discover that this is no ordinary assassin as a bigger picture begins to unfold. Harper Row makes her return as well and we find out what she's been up to since her last appearance. Layman is keeping a tight ship in terms of continuity. We see lots of mentions of events happening in the other Bat-titles and the back up. We'll have to wait and see if the main story results in further repercussions, especially considering the current events in RED HOOD AND THE OUTLAWS. Layman is building up his corner of Gotham and you don't want to miss out on it. 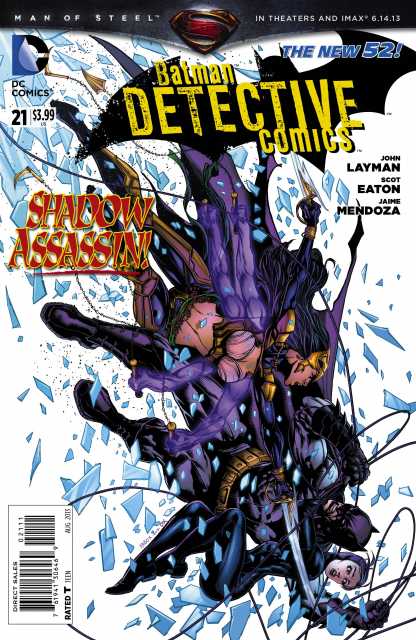