Find out how the robot boy, Tim-21, ended up in the space colony before the big event.

In the first issue, we were introduced to a boy companion robot named Tim-21. We saw him awake after the ten year period in which gigantic robots wiped out several billion. Tim was oozing with innocence as he awoke and tried to piece together what had happened. The problem for Tim-21 is a group of hunters have come across him in order to collect a huge reward. There seems to be more to the Tim series of robots than the creator, Dr. Jin Quon realized.

As the action of the story picks up, we get glimpses of Tim-21's past. He was brought to the moon colony to fulfill his purpose as a child companion robot. There is a Pinocchio feeling as Tim-21 has human feelings despite the fact he's just a robot. Seeing his interaction with his human family is very touching. Jeff Lemire hits all the right buttons in bringing out your feelings. You won't be able to resist feeling something for this innocent little boy robot. But how innocent is he? There may be more to him than we first realized.

Dustin Nguyen's art is amazing. You easily find yourself immersed in the world with the characters. You'll be glued to each image in the flashback. At the same time, there are moments where you can see the texture or blending of colors in the art. It doesn't exactly pull you out of the story but it gives you another to closely look and stare at the art.

I mentioned the slight similarity between Tim-21 and Pinocchio. It feels a little obvious at first but then Lemire really takes it to a different level.

Another complaint-that-isn't-a-complaint is you find yourself pulled into the story and then suddenly hit the last page. You can't help but want more.

Lemire and Nguyen are proving to be a great creative team. I often find myself a picky when it comes to Sci-Fi stories, especially in comic form. The first issue saw a ten year time jump and thankfully we do get some flashbacks to add to the characterization. We get to see more of Tim-21's story and if you didn't already love the character, you won't be able to resist the emotions that start bubbling towards the surface here. You won't even realize that many of the characters introduced in the first issue don't even appear here as you'll be glued to Tim-21's plight as he fights for survival. DESCENDER is really growing into something special. 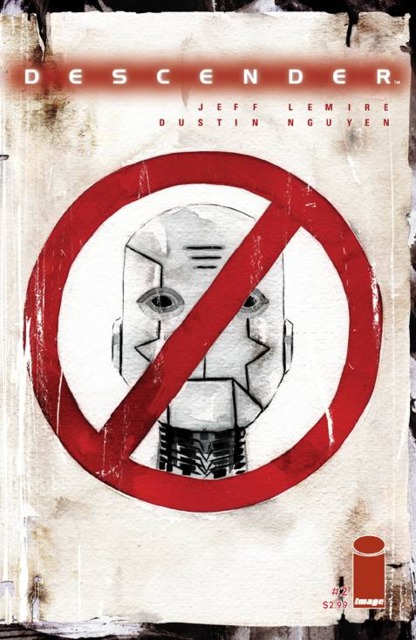