This brand new series will take you away on an incredible journey to a place you never knew could exist.

It’s always a good thing when we get a brand new series introducing us to new characters and worlds. It’s even better when it has great writing and art. DESCENDER is the new creator-owned series by Jeff Lemire and Dustin Nguyen. These two veteran creators took the plunge and the risk in trying to do their own thing. That risk paid off in big ways.

One of the things I enjoyed was as we are introduced to this new world and its people, a strange arrival occurs. What follows is an event that has catastrophic results. That’s when the story jumps ten years later. I’m always fascinated when something like this occurs as you can’t help but wonder what happened during the missing time period. We do get a general idea along with the consequences of what happened. This is where we meet one of the main characters, Tim-21, a young companion robot who has just awoken after the ten year period. It's safe to say you'll immediately fall for Tim-21 and the plight he gets pulled into.

As far as the art, I've been a fan of Dustin Nguyen for some time. It's a great feeling when an artist, who's style you know so well, manages to surprise you in a positive way. Dustin's art blew me away. A long running gripe I've had is the colors in sci-fi comics. They often make the vehicles and environments look too artificial. Dustin's use of watercolors gives it a softer feel that also allows a more organic look to the characters. You really feel immersed in the different environments with the way the vibe of each scene changes.

And of course there was that bit of news about Sony acquiring the film rights to this series. You'll want to read it now so you can brag to all your friends.

This was a fantastic first issue and introduction to a brand new world and concepts. Nothing to complain about.

Get ready to read your new favorite comic. It's a great feeling getting your hands on a fantastic new series. We've seen many takes on all the different genres but Jeff Lemire and Dustin Nguyen's take in the sci-fi arena is a glorious and gorgeous trip. Right from the beginning you get a sense of how large in scope this series and its world can be. We are introduced to some likable characters that make us eager for more. It's always difficult to add a brand new series to your (likely) overflowing pull list. Adding DESCENDER to your pull list will be something you won't regret. 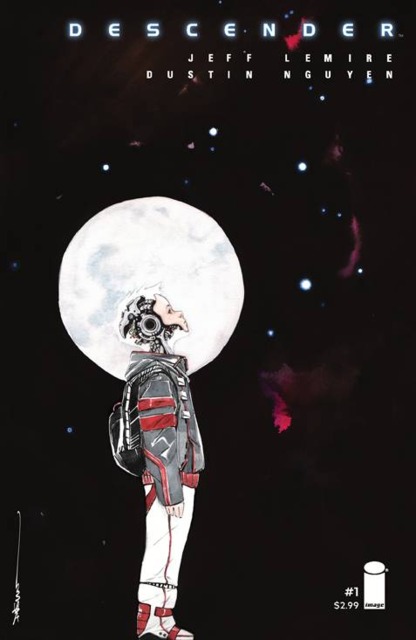