Some conspiracy theories are pretty out there and tough to believe, but what if not all of them are just crazy theories? What if some were true and there was an agency working to make sure the public never knows about it? Welcome to the shadowy world of Deep State.

The world seems like a pretty big place, doesn't it? So many people want to travel the world but will never get the chance to (traveling is expensive, people). But if we zoom out, we're just a speck in a massive, massive galaxy and, in turn, that galaxy is just a speck in a massive, massive universe. We'll never know about everything that's out there, and we'll never even know everything that takes place right here on Earth. That won't stop people from trying to find out, though. Over the years, we've heard of several popular conspiracy theories. From the moon landing to JFK's assassination, some people claim the truth is out there and there are people doing their best to prevent everyone from learning about what really happened. Now, we obviously have no idea whether there's such an agency in our world -- if there is, odds are we won't ever get a good look at it -- but in the universe of DEEP STATE, we're getting pulled into its seemingly surreal world and getting a look at the people who try to prevent the truth from getting out there. The "Men in Black" -- which is even joked about -- have one simple objective: Make sure everyone thinks conspiracy theories are just theories.

With a premise like this, you'd imagine the first chapter would be overflowing with exposition and it would slow down the pacing. Thankfully, Justin Jordan manages to get all of the information out there in an interesting way. He has a talent for making characters unleash infodumps in a seemingly natural way. He's packed this debut issue with intrigue and really gets things moving forward. The first case deals with the moon and, while it isn't the most original take on it -- at least not yet -- it still has me absorbed and wondering how it'll play out. By the time the issue is over, I was left wanting to immediately see what happens next. Yeah, that's obviously the objective of all cliffhangers, but the handling of revealing this new world and its characters really won me over.

Artist Ariela Kristantina and colorist Ben Wilsonham's character work occasionally feels a little rough -- which feels appropriate for the tone at times -- but where they really thrive is creating the right atmosphere. Not a single scene takes place during the day -- if it does, it's indoors so we can't tell -- and that overwhelming darkness and feeling of the unknown is perfect for Jordan's story. The very first panel hits you with a strong sense of mystery and wonder as we see a peaceful landscape and a gorgeous night sky. There's no light pollution limiting visibility here; the universe is right above the land and it immediately makes you want to explore and think about how vast this place is. This image alone is a fitting way to open the book, but then we focus on an object racing towards the Earth. What is it? We get closer and closer until we're finally teased about what's inside the object. It's an awesomely cinematic way to grab our attention and keep this mystery lingering in the back of our minds as the story moves forward. Thankfully, we'll get answers before the issue concludes and it's definitely an interesting enough dilemma for the opening arc.

I really like how John Harrow recruited Branch and this allowed us to learn some of the basics, but going from accepting the job to heading into a mission -- an especially dangerous one -- seemed kind of rushed. I know there's limited space in a comic and a training sequence would feel like the chapter has too much exposition, but it felt somewhat irresponsible and/or swift to just bring her out there like that, without even showing her any of the really important things (as far as we know, that is). Maybe this is his way of testing her in the field? "Trial by fire" and all that?

Minor gripe: Characters' eyes sometimes appear to be a little too far apart and it's a bit distracting in some panels.

Does a more serious sci-fi book with a horror vibe that draws parallels to X-Files and Men in Black sound good to you? If so, you'll want to pick up BOOM! Studios' DEEP STATE #1. Jordan yanks us right into this shadowy world and unleashes a very entertaining first mystery. With just this debut chapter, he's able to tell us the basics about what makes this place unique, gives us a little insight into the two leads, and delivers an exciting conclusion. Kristantina and Wilsonham's visuals are a great fit for this darker and more mysterious atmosphere and each page does a more than satisfying job pulling you into each setting. DEEP STATE is off to a very promising start and, if you love sci-fi mysteries, you should really consider checking it out. 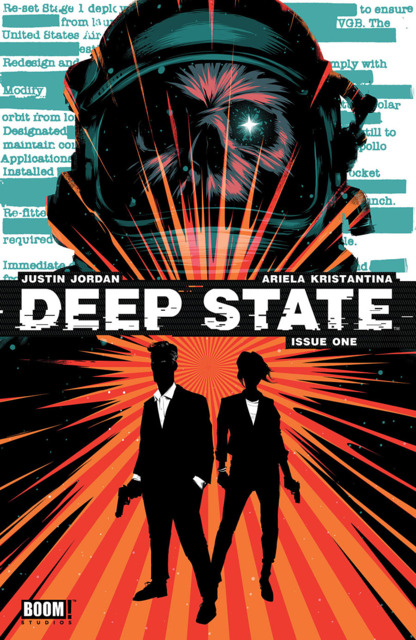