Deathstroke vs Batman. Things are going to get ugly. But it also looks really great with Tony Daniel's art.

The moment we all knew would come sooner or later, Deathstroke vs. Batman. Deathstroke is supposed to be the deadliest assassin in the DCU. Batman is...Batman. He's supposed to be able to take on anyone. With Deathstroke in Gotham City, there's no way he could avoid a confrontation. Keep in mind that Deathstroke is a little off his game with his recent transformation. He's trying to adjust to the changes he went through but we have seen him up to his usual violence and mayhem.

It's easy to expect this to be a quick fight. Because it's Deathstroke's book because Batman is who he is, we get a very nicely drawn out battle. Tony Daniel makes sure it's a brutal and intense fight. You might think you'll know how it'll play out but Daniel throws some twists our way.

Despite the nice and lengthy battle, it doesn't fill up the entire issue. We do get more on Jericho and Ravager. It's fantastic seeing Rose here. I'll admit I kind of lost track of what she was doing in the New 52. With the way Daniel keeps cranking up the action, we can expect some great things for her, Jericho, and Slade.

Having Batman appear felt a little unnecessary. In the past, comics have used a guest appearance by Batman as an almost desperate notion. Thankfully Daniel makes it fun and exciting.

Harley on the other hand, feels like more of a nuisance. It's understandable that she played a part in this book to tie up some loose ends from SUICIDE SQUAD. Maybe she added some levity during the fight. She just started getting to be too much here.

It's like a comic fan's dream, Deathstroke fighting Batman. Often a Batman appearance feels forced but Tony Daniel makes it fun and exciting. He's been spoiling us with lots of big and over the top action. The fight between the two is just what we'd want. Daniel doesn't just fill the issue with a huge fight scene. We get more on Jericho and Rose along with those pesky bad guys stirring up all sorts of trouble. Tony Daniel is cranking up the action and storytelling in this series. There's no telling what will happen next. 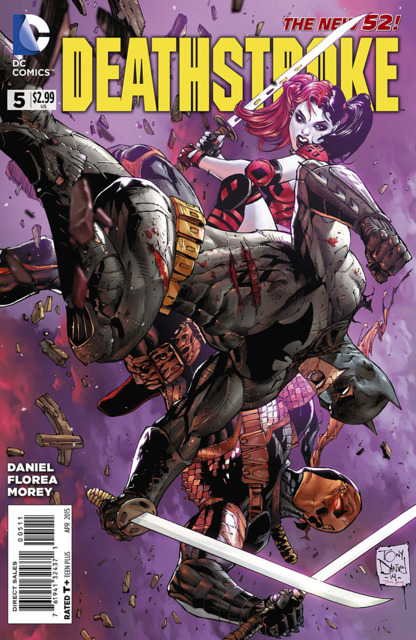