This is the final issue, Slade fans. Does it go out with a bang or does it fizzle away?

Bravo to co-writers Justin Jordan and Tony Bedard for one really good swan song. After last issue's over the top events, I was sure this was going to be an issue filled with fairly campy moments ("I'm bad, but I'll do what needs to be done to save my family!") and predictable solutions. Well, they proved me dead wrong. Right when it seems like the resolution to Jericho's wrath is over... bam! Another dilemma. And right when we think that's over.. bam! More madness! Then, it's all topped off with a completely unexpected emotional finale. Seeing the good guys overcome impossible odds is always inspiring and gripping, but sometimes seeing how characters on the other side of the aisle resolve these terrible scenarios can be far more riveting... and that's exactly what happens here.

The visuals by Edgar Salazar and Juan Fernandez remain consistent for the most part. The action is easy to follow and the hits certainly feel forceful. That said, the panels truly shine during the aftermath of all the chaos. There's an extra emphasis on shading and it's a perfect modification to fit the dark turn of events. Oh, and I swear his goatee is jelled to look like an upside down Wolverine. Just saying.

If you've been reading the series, then the opening may be a bit jarring based on the previous issue's conclusion. Jericho and Majestic are basically face-to-face with Deathstroke and Lynch, but now Majestic is off fighting a ship in the sky. I guess he just stopped by the say "hi" and then swooped off to face a bigger threat. It felt a bit odd seeing as #19 seemed to imply an immediate conflict, then the next thing we know he's elsewhere.

A few moments felt overly dramatic to me. There's a panel of Terra basically going beast mode, yet Slade is able to stop her with one arm and she waits around to listen to reason. If she was as motivated as the previous panel implied, I have a feeling Slade would need to do more than the, "Chill, bro" response to stop her.

Wrapping it up with an A.R.G.U.S. after-action report felt really lackluster after hitting us with such an engrossing scene. I feel like the series would have left more of an impact if it concluded on the note right before the report begins.

While the final remark is meant to express how badass Slade is (you know, just in case you haven't heard by now), it also feels like a jab at the character's future. Let's say some writer has the opportunity down the road to give Slade his own ongoing again. Well, God help him when it comes to keeping that series alive! It's definitely a shame to see Slade leave just when things were turning around, but hey, at least it ends on a high note, right? Here's hoping we see more of the Terminator in other titles. 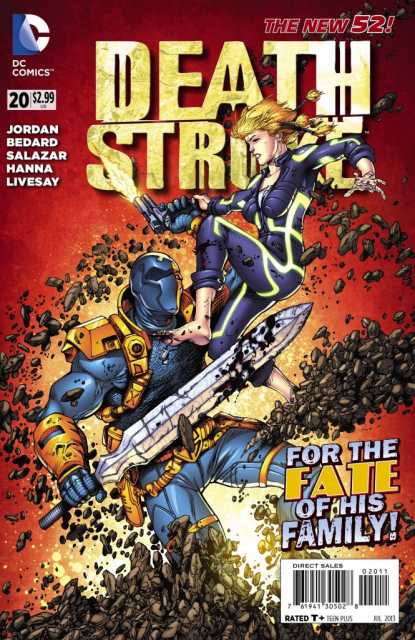