Deathstroke #2 - Journey Into the Abyss

Slade has gone through a big change but there's no time to get used to it as he tries to get some answers.

It feels like it's been too long since Deathstroke has been allowed to unleash his fury. Last issue ended with Deathstroke going through a pretty big change. Before he can get to the bottom of that, he has plenty of other stuff to deal with. Tony Daniel is giving us some insight into Slade's inner workings of his operations as he tries to figure out why his recent mission took a turn for the worst. Seeing one of his hidden bunkers has been fascinating even if, unfortunately, it doesn't last too long.

One of the fascinating things about this story is the fact that Slade is missing some memories from a past mission. How that came about is intriguing. And before any of this can immediately be dealt with, Slade has an army of soldiers on his doorstep to deal with. If you've been wanting or waiting to see Deathstroke completely cut loose, you'll get that here. If that wasn't enough, wait'll you see who pops up in here.

As if action and a mystery wasn't enough, Daniel's art keeps pace with the story. I've said it before, Daniel's art keeps getting better with each book he works on. You can see the time and effort he's putting in. Whether it's a scene with a conversation or all out action, everything looks so crisp and clear. Sandu Florea's inks and Tomeu Morey's colors are outstanding as well.

Slade's big change is definitely in the wait-and-see category. Long time fans might grit their teeth a little over something like possibly being permanent. It doesn't necessarily change who Deathstroke is in major ways. It does feel a little off. We've seen these sort of changes many times in comics so there isn't a reason to get worked up over it. Plus, if the events in FUTURES END hold, we know things will someday revert back to normal.

The missing memories could be seen as a little convenient. We may have seen this sort of thing before but it still fascinates me. Part of the fun will be in seeing the truth come out and unfold across the pages.

Just as Deathstroke is killing the opposition, Tony Daniel is killing it on this series. (Well, not exactly in the same way). We've seen Deathstroke go through a change but there's a big mystery going on at the same time. While we get to see more of what makes Slade Wilson tick, there's still plenty of over the top action to show what he's capable of. Don't assume this is pure gratuitous violence. There's a lot going on here and this series is headed in a great direction. 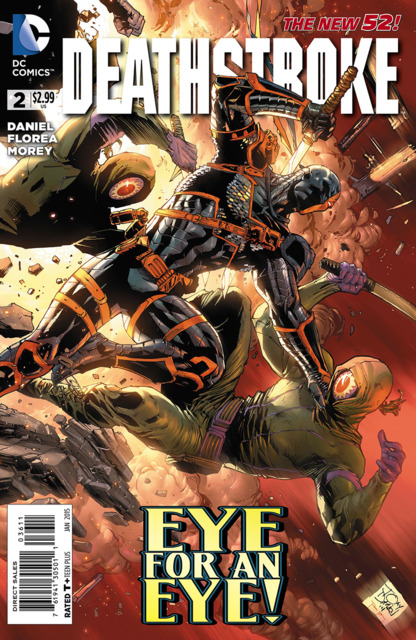