Deathstroke's search for his daughter takes him to LexCorp. What will Lex have to say about that?

Deathstroke is known for being a brutal mercenary that will stop at nothing to get the job done. Lately he's been on a more personal mission. Discovering his daughter, Rose, has been abducted, he is determined to find her and fight through anyone that stands in his way. After a big fiasco at Belle Reve, he discovered that was a set up. His latest intel points to Rose being transported to LexCorp in Metropolis. That means Slade will have to infiltrate Lex Luthor's security in order to get to the bottom of things.

Let's just say Slade doesn't take a stealthy route. One of the things we've come to expect in this series is big action along with the story. We all know and can imagine what sort of security measures Lex will have in place. Besides Lex's security force, Slade will have to deal with Mercy Graves as well as test his mettle against Lex's battle suit.

James Bonny keeps the story going at a nice pace. The action is mixed up with several different things thrown at Deathstroke. It would be easy to just have an army of guards or robots or whatever Lex might have. Bonny gives Slade plenty to fight against.

Tyler Kirkham continues to rock the art here since Tony Daniel moved on. With so much happening on each page and within each panel, Kirkham's attention to detail is glorious. There's a few different layers to the action in this issue and it builds more and more with each turn of the page. There's a nice touch of lighting and shading along with Arif Prianto's colors that makes it all look great.

My only confusion is Rose's character. I recall her during the early issues of SUPERBOY and THE RAVAGERS. She seems a little different now, but it's on me for not reading whatever happened to her in between those books and her appearance here.

A minor disappointment was the way the battle with Lex was handled. Some questioned his motives from the solicit since he's supposed to be a good guy now in the Justice League. Still, Lex is Lex. Why and how there'd be a major fight with Deathstroke is explained. It felt a little too convenient for me, but still resulted in a nice battle.

There's no slowing the action and suspense in the pages of DEATHSTROKE. James Bonny and Tyler Kirkham deliver another action-packed story that keeps readers on their toes. Deathstroke has to infiltrate LexCorp while searching for his daughter. Deathstroke may be good at what he does but he might be in a little over his head. You'll want to stand up and cheer at moments while cringing at some of the hits taken. This is an superhero action comic full of substance. Reading DEATHSTROKE is a blast. Thankfully it's not a blast coming from one of Deathstroke's weapons. 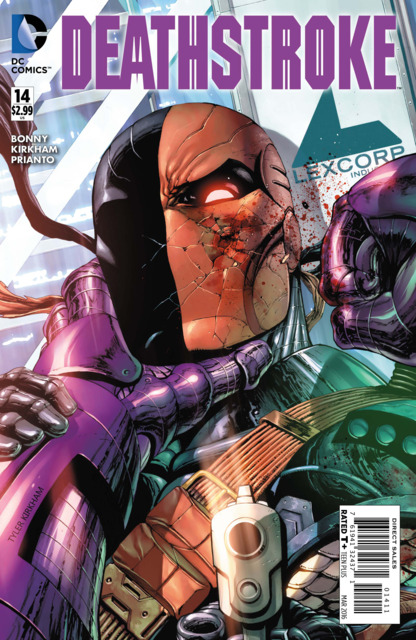