Deathlok #1 - The Enemy of My Enemy

Meet Henry Hayes, the newest Deathlok. Too bad he isn’t aware he is one.

When an existing character gets a brand new comic, there’s likely still plenty of baggage from their previous history in the Marvel Universe. With this volume of DEATHLOK, that isn’t quite the case. Deathlok has been around since the 70s. There has also been different versions of the character. Rather than just have this be yet another brand new Deathlok, Nathan Edmondson adds a little twist. Henry Hayes, the Deathlok in question, isn’t aware he is a Deathlok.

Henry Hayes is part of Medics Without Borders. He spends his time rushing into dangerous war zones to help those that need to be saved. What he doesn’t realize is when traveling, he is called into service, unaware the programming is inside him. To clarify, Hayes does have a prosthetic leg and obviously other implants. You’ll see how he gains the rest of his gear when needed for missions.

Part of the mystery and suspense of the story is being in the same situation as Hayes. Who is sending him on the missions? We even see Maria Hill looking into a situation he was involved in. To add to Hayes’ situation, he is also a single father to a teenage daughter. That alone gives him plenty of problems to deal with.

Mike Perkins' art fits the story nicely. Hayes has his own look, even as a Deathlok. The locations appear varied enough to illustrate were in other parts of the world and the action scenes are well coordinated and have a great flow. Because Deathlok isn’t your typical superhero, his action scenes require a certain amount of finesse. Perkins gives it just that.

Most of how Hayes operates as a Deathlok, unaware, is explained. It does seem like a bit of a stretch to accept he is able to go on Deathlok missions without realizing it. We’ll have to see more on how it all works and what happens if he tried to talk to anyone on the more humanitarian mission he was supposed to be on. We can’t have all the answers at once and it does give us something to look forward to. It’s just a matter of someone trying the comic out for the first time being patient enough to get some more answers.

It’s an interesting premise, having an almost regular person be the Deathlok. You can’t help but wonder how long this will go on until he finds out there’s more going on when he’s on his missions. You can feel where the series may be headed but hopefully there are still plenty of twists and surprises to come.

Deathlok is meant to be the perfect weapon. Imagine that weapon being completely unaware that it is an actual weapon. Nathan Edmondson has added a nice twist to the concept of Deathlok. Having a new character completely in the dark about being a killing machine adds an intriguing twist to the character. We’ll be on the edge of our seat as we wonder if he’ll find out what he’s really doing when away. What better way to maintain a secret identity than to be unaware you actually have one? Mike Perkins’ art looks great here. The characters have their own feel, carving out a new little corner of the Marvel Universe yet there is some familiarity with Maria Hill and S.H.I.E.L.D. being present. DEATHLOK is a series that will completely grab your attention and you’ll be happy when it doesn’t let go. 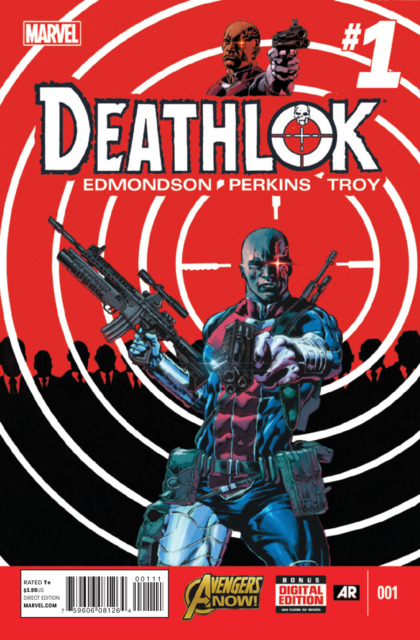