The Death Vigil continues its increasingly difficult battle against the Primordial Enemy.

The battle between the forces of good and evil is something we've seen a thousand times before in the fantasy genre. That's exactly what we're going to see again in this new series, and while DEATH VIGIL may not bring anything drastically new to the table, it more than makes up for that with its enjoyable cast and absolutely gorgeous visuals.

Writer/artist Stjepan Šejić's pages are a beautiful sight to behold. The characters are lively and their expressions pull you right into this fictional universe. The dialogue alone makes them interesting, but these praiseworthy visuals then make us experience so much more empathy. Whether they're joking around -- which is often -- or saddened over the loss of an ally, you can appreciate and understand what they're going through with one simple glance at a face. It's not all likable heroes, though. The monsters are awe-inspiring and these twisted creations appear every bit as formidable and frightening as they should. On top of excellent character work, the world around them is brought to life with an immense amount of talent and so much attention is given to the environments. Every page had me completely immersed in this new universe. There's over 40 pages in here (more than justifies the $3.99 cover price, yes?), and I remember thinking only one or two panels felt slightly rushed. Seriously, the artwork here is incredible and your eyes deserve to experience this.

The story may not be anything totally original -- at least not yet -- but Šejić's character work is thoroughly entertaining and there's a couple of developments which help make this stand apart from the other "good vs. evil" fantasy tales. Yes, this overall narrative is familiar, but there's a constant flow of levity and the characters are charismatic. They're a likable bunch and this left me wanting to see what'll happen next for them. Sure, the story's taking beats that'll remind you of other adventures, but I've already begun to feel attached to these characters and that's a great accomplishment for a first chapter. Plus, the final page definitely has me curious to see what'll come next.

This is the first chapter of an all-new series, so it's totally understandable that a fair amount of time needs to be spent on worldbuilding. That said, there were a couple of spots where the exposition felt a little redundant. We're also hit with some emotional moments, but since we're still getting a hang of things, it's tough to really connect with these bits.

Minor gripes: someone being cut off before cursing is funny at first, but it seemed like that was used a little frequently. That seems a little odd since there's a fair amount of cursing and only one word needed to be censored. Also, The ending has me wanting more, but it would have been nice to get just a little more for the villain's side of things.

Stjepan Šejić's DEATH VIGIL has won me over for two very simple reasons: the artwork is stunning and the characters are legitimately entertaining. The story may not blow you away just yet, but the basics of this world are presented well enough and this feels like just a taste of what's to come. On top of that, the script manages to always keep these pages fun and exciting. Just enough happens to capture our interest in this new world and now I'm left wanting to see more. DEATH VIGIL's charismatic cast and amazing artwork makes it something anyone can enjoy. You really don't need to be a fantasy fan to appreciate this one. 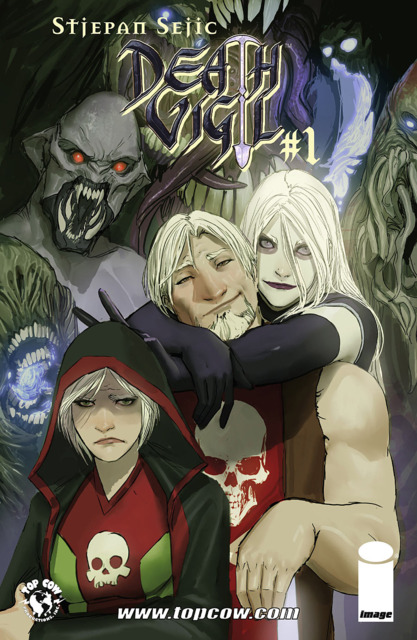