Death of Wolverine: The Weapon X Program #1 - Phase One; Question

Picking up moments after Wolverine died, find out what happened next.

Did you hear the news? Wolverine is dead. With the death of the furry mutant, we're seeing many different titles with the "Death of Wolverine" title at the front. What makes this one any different? There's a couple things. The first is it's written by Charles Soule, the man responsible for writing Logan's actual death. The second thing is this title does what pretty much all the others have skipped, showing us what happened right after Wolverine met his fate.

With Abraham Cornelius involved, you know it can't be a good sign. He had been conducting tests on subjects to try to replicate and better the entire Weapon X experience that Logan went through. And by "better," I mean get better results that they could control. Soule lets us see some of the survivors as the facility is about to go to hell. We see a familiar character from DEATH OF WOLVERINE, if you read the last issue carefully. We also see some new faces and you have to wonder what's in store for these characters.

Then of course there's that insane last page.

The art is by Salvador Larroca. That means you likely have a really good idea what to expect. Larroca's art is always a joy to see and when you throw in color by Frank D'Armata, the visuals alone are a reason to pick up the issue.

New characters can be hit or miss. As we see the survivors try to make their way out of the facility, you don't really feel a connection to them. They appear to be victims but, then again, you can't really be too sure. If any of them happened to perish, it wouldn't have much of an impact because you don't really have a feel for them beyond possibly the fact that they've been through an ordeal.

The death of Wolverine is having a big impact in the Marvel Universe. We're seeing a lot of books tie into it but this one actually takes back to the 'scene of the crime.' Taking place moments after the death, there's almost an eerie feeling as we see other victims to Dr. Cornelius' Weapon X plans. Charles Soule introduces us to some new characters and also brings back one character that will make you scratch your head as you try to figure out what he's doing. If that wasn't a mystery enough, not knowing what's next for these characters is intriguing. Don't let this book get lost in the mix of other "Death of Wolverine" tie ins. There's definitely something peculiar and fascinating going on here. 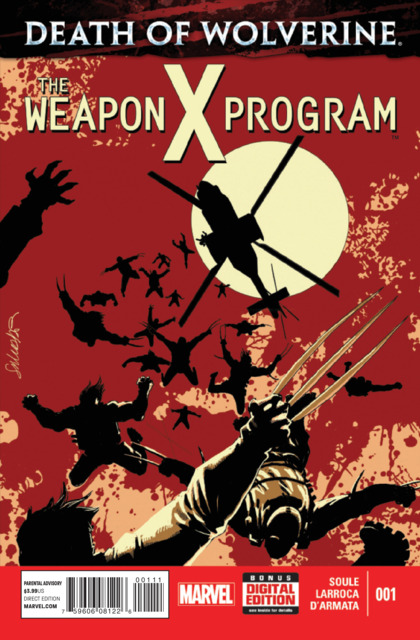